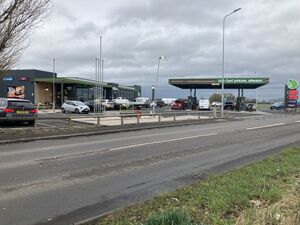 A49 at Dones Green
(also accessible to traffic on the A533)

A small petrol station and truckstop by the Dones Green crossroads which has recently transferred to the Welcome Break estate.

Overnight parking is available next to Lets Eat Café for £18 per night. 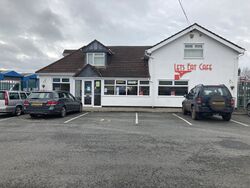 The Lets Eat Café behind the forecourt.

The service station started out as a 1950s garage called Tall Trees, in the corner of the crossroads at Dones Green. A transport depot opened up behind it, which became a full truckstop with its own restaurant.

In around 1975 a house servicing that garage was extended to become the Lower Whitley branch of Little Chef. The building had a forecourt sales shop at one side, a restaurant at the other and accommodation upstairs.

A hotel was later built in 1989 and opened under the name 'Tall Trees Lodge', next to and accessed via the forecourt. This went onto become Happy Guests Lodge in the early 2010s.

The Little Chef closed in 2005, and became an extended forecourt sales shop. At this point, the direct access between the forecourt and hotel was moved to a new direct access point on the A49.

The forecourt has been branded Texaco, and BP since the late 1980s. The forecourt shop was previously an 'eXpress' store throughout the 2000s and became Mace in the early 2010s.

During the summer of 2016, the site was acquired by Applegreen who rebranded the site to their 'Low fuel prices, always' branding. At this point, Applegreen started to refer to the site as Whitley service station. In late 2018, Applegreen redeveloped the site, demolishing the former restaurant and sales building and reopening in summer 2019 with a new, larger sales building offering Costa and Greggs concessions inside.

Even though the hotel and truckstop are no longer part of the service area, they still insist they are.

Applegreen purchased a significant stake of Welcome Break in November 2018. One of the trade-offs of the purchase was that Whitley would eventually be re-branded Welcome Break, and adjusted to reflect the rest of their estate. While there has been little public evidence of any action, in October 2021 Whitley was added to Welcome Break's website as one of their locations.