Unbuilt Services On The M3

For a list of current service areas on the M3, see Services on the M3.

If you follow the M3 out of London, somewhere around Basingstoke it will start to feel like a totally different road. That's because for many years the M3 ended at J8, and this is key to its service station planning.

In the 1960s, the Ministry of Transport were working on a three stop plan for service stations on the M3 that was about to begin construction. The County Surveyors Of Hampshire's joint report recommended using Shepperton, Windlesham and Andwell, but the Ministry didn't like the spacing of those and instead went with:

We don't know why the MOT numbering was so erratic on the M3. One theory is that Kempshott's number was an error, and it should have been SA67 - but there's no evidence to support that.

As with other motorways, the Ministry were adopting a policy of building service areas every 15 miles, and only opening every-other one until traffic had settled. On the M3, this would mean that Trumps Green and Kempshott would be built.

As explained below, there was a last minute U-turn, and Fleet was opened instead, with the other two being held in reserve. In the event, Fleet wasn't ready in time for the motorway either, but it was the only one that ever opened.

The M3 was extended from near Basingstoke to Winchester in 1985. At this time, the government were still responsible for finding new service area sites, but they tended to do so after the event. In this case, they were unlikely to search for a new site when they still had Kempshott waiting to be used.

The road between Winchester and Southampton was finished in 1995. By this point, it was entirely up to the private sector to select new sites for service areas. Most of the motorway here is claustrophobic and congested, so it would be difficult to place a new service station. The M3 was also extremely controversial, and a new service station would face the full force of Winchester's protest groups.

There is one strange exception. Documents from 1972 refer to discussions with Shell about "Pitmore Copse services". There was no M3 at Pitmore Copse at the time, but there was the old A33 dual carriageway. It seems the Ministry took over a planning application from Shell for a new service area, but then decided Kempshott and Rownhams would do the job. They had said it would be a good place to stack lorries heading for Southampton Docks.

No location for Pitmore Copse services has been provided, but the mileage given would place it at what's now M3 J12.

The M3 may only have two unused service station sites, but both of them come with their own saga. A benefit of the M3 being one of the later motorways to be planned was that each service area was allocated a very large plot of land, but this made it more difficult to get them built.

These sites can both be matched up with the map at the top of the page. 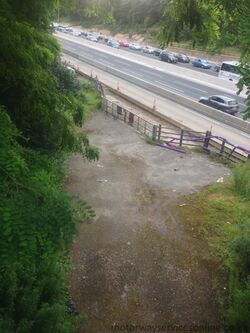 The theory at the time was that service areas close to London would make the most money. With its high traffic levels and proximity to the M25, Trumps Green is still a desirable location today. Forecasts in the 1970s said this was going to be the most profitable service station in the country. So why wasn't it built?

The south-westbound side was used as a temporary works depot during the construction of the motorway. A 'ghost slip' left over from this can still be made out today, and there are gates blocking a very badly-maintained access to the motorway via the site from Kitsmead Lane.

At one point it appears operators were invited to submit their bids for the site, but the responses weren't analysed. This suggests detailed plans for Trumps Green are in existence, but can't be found. Examples of typical service station layouts applied to a map of this location were issued though.

Each side would have been about 16 acres in size, though another report said the Department for the Environment's motorway department had purchased a total of 24 acres here. Single storey buildings were requested.

It does have an amusing name, but unfortunately this bonus factor was not considered when planning motorways.

Trumps Green was going to be the first motorway service area to be built close to existing houses. This "serious impact" formed the basis for the majority of the complaints, and was what had caused Redbourn to be dropped. Much of the trouble came from the Knowle Hill and District Residents Action Group, who felt they had been treated unfairly by being consulted on the route of the motorway, and then getting no say on the service area.

Another issue arose with a deal to exchange land with the army to make more space for the service area. This, the mountain of objections, and the issues further down the road at Kempshott described below, all forced an "urgent review" of the situation. Three service areas would have been unnecessary for a newly-opened road used mainly by commuters, especially with plans for connections at the London end still unfinished. Trumps Green was removed from the motorway's Compulsory Purchase Order.

While postponed, concerns were raised about how suitable Trumps Green ever would be. Its location was dangerously close to the M25 interchange (not built at the time), difficult to access, and likely to attract protests. Alternatives were looked at, including inside the M25 at the former Shepperton gravel pits, and a favoured site at Windlesham which was ruled out as the land may have been needed for the proposed M31 motorway. Other sites were considered at Chobham Common (popular but difficult to build), Valley End (problems with a local school) and Oakwood.

Unable to agree on a suitable site, the planned service area stayed on the cards. Other planned services, such as Colnbrook, were planned on the basis that Trumps Green would be built first. But the land was never purchased (beyond what had been used for the construction of the motorway), and progress was never made.

In 1995, the Highways Agency confirmed that they still owned the land at Trumps Green south-westbound, but said that it was "not in use". There had been a plan to use some of it to widen the M3, but this didn't happen. More recent maps show the national highway authority owning a large swathe of land by the north-eastbound side, but not south-westbound. 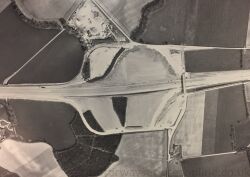 The unbuilt service station from above, in 1970.

Kempshott's progress seemed a little more positive. The land was purchased by the Ministry of Transport, and they spent £60,000 preparing it. Four 'ghost slips' were built on the M3. An aerial view from when the M3 was built makes it very clear that there was going to be a service station here. It was a large site - 35 acres in size.

Granada and Fortes both submitted bids to run Kempshott in January 1969. Both the Planning Authority and the Landscape Advisory Sub Committee felt that those proposals were poor efforts that did not do the location justice, so they re-opened it to new tenders in July 1969. Granada were annoyed at being snubbed and withdrew from the process; Fortes apparently had a new design ready to go, but they calculated the better design would cost them an extra £100,000, and they chose not to submit it.

This was a cause for embarrassment for the Ministry. A few months earlier they had struggled to interest anybody in the service areas in the Lake District, and now they had failed at the M3's too. A re-think was needed, and they decided to cut their losses and leave Kempshott to lie fallow for now. The County Surveyor for Hampshire had pushed for just toilets to be provided here, but given the additional failure at Trumps Green (above), an urgent review led to Fleet taking all the limelight for the time being.

The Observer Road Atlas of 1976 did mark this service area as open but unnamed. An Ordnance Survey sheet dated 1977 showed the north-eastbound exit from the M3 joined up to Beggarwood Lane, as it probably was during construction.

The notion of a future motorway service area at Kempshott continued to be part of the Hampshire Local Plan, until the Highways Agency requested it be removed in March 1995. They confirmed that they still owned the land, but said that it was "not in use". By this stage, building new service areas was no longer their responsibility.

The planners felt that Kempshott was an important location because it would be the last place to provide any facilities for HGV drivers before they reached the end of the motorway. Perhaps that's what put the developers off - they knew that there were other facilities on local A-roads, such as the original Popham, and they didn't want to compete with them.

There had been interest in the land from other developers, and in 2003 the unused north-eastbound side was sold to Taywood Homes. The north-eastbound entry and exits were removed at the same time, after being used to construct the houses. The people of Causton Road probably have no idea that they live on a service station-shaped housing estate.

In 2016, Applegreen planned to build a service area on the unused south-westbound site - see below. Unusually, Highways England pointed out in the consultation that this location was already laid out for a service area.

The field where traffic from Granada Basingstoke services would have joined the roundabout.

Some of the new motorway services once planned for the M3 we have uncovered include: