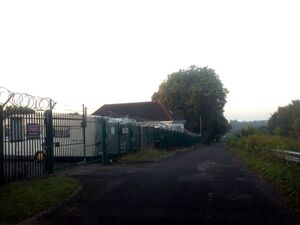 This service station is closed. For the only official, open services on the A33, see Swallowfield near Reading.

Although today Popham services is a service station with a Little Chef on the A303, the name was originally given to a signed TRSA on the A33 southbound. The two were both accessed from different directions at M3 J8.

The A33 was the historic route from London to the South West, and Popham was on the section between Basingstoke and Winchester. In 1971, the new M3 motorway ended at Popham, and the services were set-up half a mile to the south in a lay-by which had been created when the A33 was upgraded. It was on the site of an old school.

While there had been plans to extend the M3 to Southampton, they weren't initially confirmed. The extended road opened in May 1985 and saw the A33 turned into a deserted shadow of its former glory.

The services featured a Texaco petrol station, workshop, Little Chef and separate toilet facilities. A former vicarage was also accessed through the services.

The services closed in May 1985. In September 1985 the old petrol station was taken over by a caravan sales centre, which was expanded in 1986, but still used the old forecourt kiosk. The restaurant survived in a dilapidated state for some time, but was significantly damaged when a vehicle deliberately collided with it. In 1992 it was demolished.