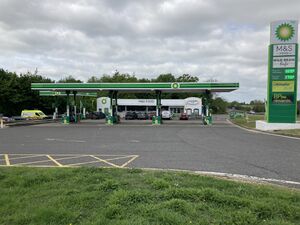 A303 westbound between Basingstoke and Andover

For a brief while this was the UK's most famous Little Chef - now it looks a lot like any other A-road service area. 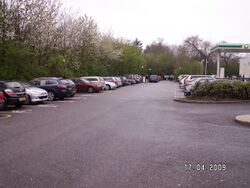 The road through here already had a service area at Micheldever. When it was upgraded to dual carriageway in the 1970s, that became accessible to eastbound traffic only, so an additional facility was required.

BP launched the planning application, proposing a forecourt and restaurant. A hotel was considered but later withdrawn. The forecourt opened in 1991, and was joined in 1995 by the Popham branch of Little ChefHistory.

The restaurant gained a Burger King franchise in 1998, which was added in a new extension. This later became a Coffee Tempo! store.

Popham in the Media

The Little Chef featured in a three-part, hour-long documentary on Channel 4 in January 2009 which saw Heston Blumenthal try to refresh the brand. Popham was chosen as a typical Little Chef restaurant and after several experiments, it was closed for a two-week refit marketed as "Little Chef has changed".

The new restaurant used brighter colours inside, new furniture and fittings, a new menu with a posher serving style, and some novelty items such as the recordings in the toilets.

For months after the documentary was aired, the site (which used to be near-empty), was packed with customers, with reports of customers queueing to enter the car park and facing long waits inside. The branch had a buzz and an energy that no other Little Chef could match, pulling in their best staff from across the country and a clientele who would never normally think to stop there.

Ultimately its success was something of a novelty, and after some deliberation, only elements of the Popham trial were rolled out nationally. 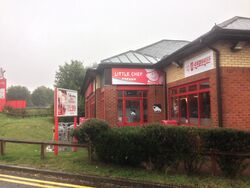 Even though the refurbished Popham Little Chef was hugely popular with the people who visited it, it was an outlier, which had little in common with the other 160-odd Little Chefs in the country. As Little Chef continued to experience financial pressure and new management with different ideas, the flagship Popham branch soon began to deteriorate. The menu and supplies were merged with that of the rest of the estate, staff training was cut back, attention to maintenance declined and some staff expressed their unhappiness.

Popham still stood out from the other branches, but it was no longer attracting as many queues or such overwhelmingly positive feedback.

EG Group bought Little Chef in February 2017, and wanted to convert them into other franchises. Popham closed in July 2017 and was converted it into a Starbucks, reopening on 15 September 2017.