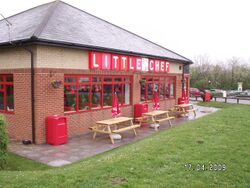 Heston Blumenthal is a Michelin-starred chef known for his interest in the science of dining, and his willingness to sample unusual food combinations.

The documentaries followed Heston's visit to several Little Chefs, and his clashes with then-director Ian Pegler as Heston tried to redesign the menu and the restaurants. Heston would insist every aspect of the restaurant was changed; he created unrecognisable dining areas with brighter colours inside and out, photos of the company's history along the walls, and more of a vibrant diner vibe. The restaurants would have sound effects playing in the toilets, and a ceiling with pictures of the sky, a reference to Pegler's use of the corporate phrase "blue sky thinking".

As a result of the changes and the TV programme, Heston's refurbished branches became extremely popular, with queues to get in and three hour waiting times. His original site at Popham was the first roadside eatery to enter the Good Food Guide in August 2009.

However, Little Chef didn't have the money or the intention to bring all of their restaurants up to this standard, and there was no suggestion that the new customers would visit often enough to keep the style going. The project needed Little Chef staff from across the country to be drafted in, and staff training that was far more detailed than Little Chef usually provided.

Meanwhile, Little Chef's traditional fanbase found the new menus to be too expensive and too high-brow. Staff at Little Chef were warned that some of Heston's comments in the programme would be hard to watch; it was ultimately a piece of entertainment and an attempt to launch Heston's TV career.

The suggestion was that Little Chef management were left disappointed with how the partnership had turned out. They were reluctant to carry out any more refurbishments, and eventually introduced a cheaper, slightly watered-down refurbishment known as Wonderfully British. This included the new logo that had been used at Popham.

As Little Chef continued to navigate financial challenges, the quality of the flagship branch at Popham soon deteriorated. It was removed from the Good Food Guide after the 2010 edition. It adopted the standard Little Chef menu and serving style, while the décor was now that of a classic diner in need of a refurbishment.

The following restaurants were refurbished by Heston: