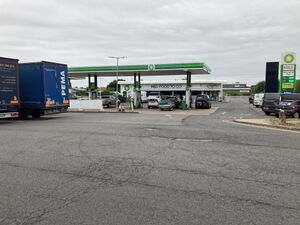 For a long time this was a pair of busy Little Chef restaurants, now it is mostly about the petrol stations.

Short stay customer parking is available for cars at all facilities, whilst short stay HGV parking areas are available at both forecourts. 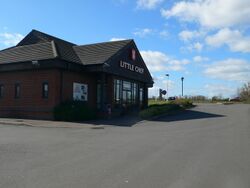 This was the last site to have two Little Chef restaurants operating in tandem, until they were broken up in 2017.

With the A14 passing through several local authorities in this area, a joint policy was created in 1987 for service areas on the new A14 to adhere to. This recommended building services at either J7 or J9, with no mention of any opportunities on this part of the road.

The location was instead chosen by Mobil, who opened the first facilities. They worked with Little Chef to ensure a westbound restaurant History opened in 1996 and an eastbound one History opened in 1998. The eastbound side used their newest generation of prefabricated building design, with what they called a "traditional look" and a fast construction time.

The westbound Little Chef received a thorough refurbishment in August 2009, and was one of three restaurants chosen to appear in the Channel 4 documentary 'Did Heston Change Little Chef?'. With trade increasing it was planned to gain a Burger King, but this didn't materialise.

Following Kout Food Group's sale of Little Chef and its associated brands to Euro Garages in January 2017, the eastbound restaurant closed in June 2017 with the westbound restaurant following a month later. Both buildings were painted black and reopened in September with a Starbucks occupying the westbound building, and Subway and Greggs stores occupying the eastbound building. The eastbound stores were crammed into the back of the building, with Euro Garages using partition walls to block the windows inside the building.

The eastbound Subway store lasted until late 2018, when it was closed. The building was then covered with Greggs branding to continue to attract trade to the site. Greggs soldiered on until Autumn 2019 when it was also closed, leaving the building empty. The building is now available to let.