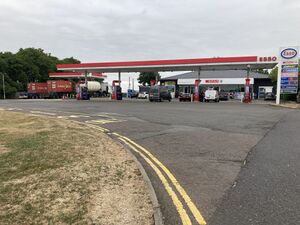 This is the original service area on the A14. For the new truckstop, see Rothwell Truckstop.

This service area is technically available in both directions, but only signposted eastbound as the westbound side involves a detour which is not suitable for HGVs.

The A14 here didn't open until the mid-1990s, however it was built over the alignment of a previous road. That road, the A6, had the Rothwell Lodge to the south, and a pair of cottages to the north called Rothwell Lodge Cottages. In the 1930s a transport depot and garage opened next to these, as well as three properties called Jonlyn.

With the A14 passing through several local authorities in this area, a joint policy was created in 1987 for service areas on the new A14 to adhere to. This recommended building services at J1 and either J7 or J9. In 1988, three planning applications in the Kettering area were considered in a local inquiry. The site we now know as Rothwell services was described as: "the disused Rothwell Farm Garage petrol station, workshop, an empty house, bungalow and a run-down orchard". The other sites were south-east of Rothwell Lodge Farm, and west of Thorpe Malsor Road, both proposed by Lawlor Land Company. Kettering Borough Council also had their own proposal at J7 considered.

The successful plan was made by Esso and described as "an improvement on the existing corrugated iron workshops". The new petrol station replaced the garage, and Jonlyn became Esso's choice of restaurant partner, McDonald's.

Esso later introduced their On the Run café to the site In around 2006 which featured a Costa Coffee offering. The site was then sold to Euro Garages in 2015 who removed the On the Run café and Costa offering and rebranded the shop to SPAR adding Greggs and Subway stores to the former On the Run space.

A large truckstop opened one mile to the west of here by Welcome Break in 2019. Technically it's a rival facility, although the existing Rothwell services only really caters for cars.