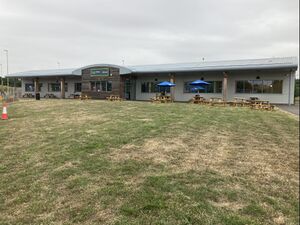 A new truckstop on the A14, which fully opened at the end of April 2019. To help security it is designed with a river dividing the lorry parking into three.

A small number of parking spaces are provided for cars, intended for staff, the idea being that cars would use the existing services at Rothwell Lodge.

Prices can be paid in the shop or using PayByPhone, with instructions in each parking area. The location code is 801990.

The fees are strictly enforced by ParkingEye. 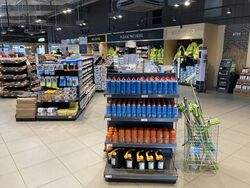 The A14 has been a major freight route since it opened, with concerns raised about the lack of facilities along it. Over time many major operators have been attracted to it, including Extra's facility at Cambridge, Applegreen's at Spaldwick and Moto's new offer, nearby at Rugby.

Planning permission for Rothwell Truckstop was first sought in 2010, by Rothwell Land Ltd. This was rejected on environmental grounds. A second plan was made in 2014, which was approved and construction started in 2018. The truckstop is 16.9 acres in size, the amenity building 908sqm (9774sqft) and there are 221 HGV parking bays.

Kettering Borough Council purchased the land in 2016, in what they called "a long-term strategic land holding". In July 2018 the construction site was put up for sale, with the landowner suggesting they had already received several enquiries.

Welcome Break opened the site during Spring 2019, with the parking area, The Kitchen (Welcome Break's latest and only self-branded restaurant) and showers opening on 29 March 2019. More facilities then opened on 29 April 2019 including a forecourt, bar, coffee lounge, gaming area, gym, launderette and shop.

Welcome Break had also intended to add a car forecourt to the site but later chose not to due to the fuel tank capacity on site and the volume of HGV fuel that the site sells on a daily basis.

There is a plan to build a hotel to the north of the site, which is being advertised as a "well-being centre".

A study undertaken in January 2022 found the truckstop was already operating close to its maximum capacity.