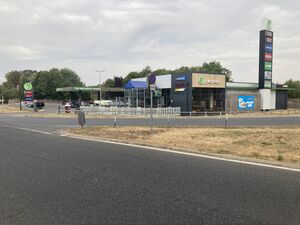 One of Applegreen's food court forecourts by the A14 westbound which has recently transferred to the Welcome Break estate. 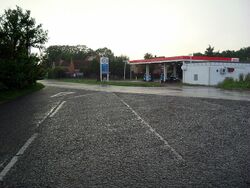 There was a garage on the edge of Spaldwick at least as far back as 1978.

When the A604 Spaldwick Bypass opened in 1983, interest turned to building a new filling station immediately next door to the original garage, closer to the new road as no signage was provided from the new road. Several plans were put forward throughout the 1980s with some including a café and toilet block for the site. In 1988, Esso submitted plans to build a filling station here and this opened in 1989. The filling station went onto become Total for a short while, before returning to Esso. The old garage was later demolished and became a small housing estate in 1997.

When plans were announced to turn the A604 into the A14, there was further interest in the petrol station, including a proposal to build a fast food restaurant, which didn't happen.

Applegreen acquired the site in 2012; This was a good investment for Applegreen as the A14 was about to be diverted away from its previous service area at Brampton Hut. They had planned a refurbishment which included a new Costa store inside the sales building with a drive-thru lane looping around the building but these plans were later withdrawn. Instead, the site maintained Esso's colour scheme, using Applegreen's economy brand name 'Low Fuel Prices Always'.

The filling station was the victim of a robbery and an arson attack in August 2015, which resulted in the sales building being severely fire damaged. The site closed for 4 weeks reopening in late August with a temporary shop being situated inside a portable building.

Applegreen commenced work on a site redevelopment in early 2017 which saw the fire damaged sales building and HGV fuelling area being demolished and replaced with a much larger sales building incorporating a Chopstix Noodle Bar, Greggs and a coffee shop as well as renewal of the fuel tanks and pumps. The new site opened in September 2017 with a Costa store as the coffee shop offering, the planned Greggs store and a Subway store replacing the originally planned Chopstix Noodle Bar. As a result of the new site opening, Applegreen arranged for new services signs to be placed on the A14, which were erected during 2018.

Applegreen purchased a significant stake of Welcome Break in November 2018 which saw Spaldwick become a 'trade-off site', meaning the site would pass to Welcome Break, and would be adjusted to reflect the rest of their estate. Management was transferred in summer 2021, but the Applegreen branding and brand partnerships remain.