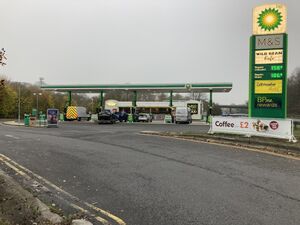 A303 eastbound between Basingstoke and Andover

The Buck dreamed of being as big as its westbound partner, but unfortunately all it can offer is a petrol station.

The unusual name 'The Buck' is shown on the road signs, despite the area being known as Longparish and Forton.

There was a pub called The George Inn, and to the west of it were a series of cottages in an area known as Cottage End. When the A303 here was upgraded, these were all demolished and the pub became the site of the filling station.

The Longparish branch of Little Chef was built in the late 1960s to the west of the filling station, with its own access from the A303. This was a small, oddly-shaped building, with a long, thin store room sticking out from the back and a rounded dining area. It closed in around 2005 and was soon after demolished.

The forecourt used to be provided by Mobil. Following the merger of Mobil and BP in the late 1990s, the filling station was rebranded to BP.

Following the demolition of the Little Chef restaurant, between 2005 and 2007, BP submitted plans to demolish the existing filling station and build a newer, much larger forecourt utilising the former restaurant land. The site eventually opened in early 2008 as one of BP's BP Express sites with a M&S Simply Food store and a Wild Bean Café.