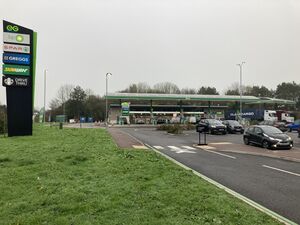 A303 west of Andover

Weyhill came back to life as a brand new pair of forecourts, with their own looped approach.

First 2 hours free for all vehicles, after which HGVs must pay £10 for 24 hours.

Prices are paid in the SPAR shop. 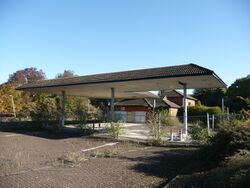 When the new A303 opened in 1986, plans for a pair of service areas here were put forward.

Both sites opened in the same year and were collectively known as Andover services, with a two-storey Happy Eater restaurant and a Star forecourt on each side. There had previously been a service area on the old route of the A303, very close by at Penton Corner, which was built in the late 1960s and closed when the new bypass opened,

There were plans to build a 60-bed Travelodge on the westbound side in 1991, but planning permission was refused. Both forecourts were sold to Texaco, who provided Star Market stores.

The restaurants were converted to Little Chefs in 1996, becoming the Andover branches. There were plans to replace them with Burger King drive thrus in 2004.

On 24 February 2004 the eastbound Little ChefHistory suffered severe fire damage after an electrical fire in a light fitting quickly took control of the whole building. Following the fire, the restaurant was closed and abandoned.

Texaco decided to sell their company-owned sites the following year, however a buyer was never found for this location so it closed. Following the loss of the filling station, Little ChefHistory closed the westbound restaurant, leaving both service areas empty.

As it was an online site, they were required to block the slip road to stop the site being abused, and did this by putting a concrete barrier across the exit slip. After some time, the road signs encouraging drivers to take the exit were eventually removed as part of enforcement action by the Highways Agency. The poles were left in place in case it reopened.

By 2010 the site was still there, but the eastbound Little Chef had barely survived the fire and the westbound one had been vandalised. There had been interest in building warehouses on the old westbound site.

A new lease of life was given to the sites in 2017 when Euro Garages acquired the site, demolished the abandoned buildings and built Starbucks Drive Thrus and filling stations on both sides of the road.

Work commenced on both sites in late 2017 and, following issues with the slip roads, the new eastbound side eventually opened on 5 September 2018, followed by westbound on 14 September 2018. Both sides opened as a set of BP filling stations with SPAR stores including Greggs and Subway concessions alongside the two Starbucks Drive Thru units. New road signs were provided, confirming that the name is now 'Weyhill services'.

The westbound Subway store was permanently closed during the 2020 COVID-19 lockdown.