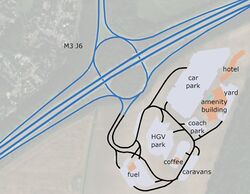 Basingstoke services is a project currently being developed by Moto, first brought to public attention in 2016.

The initial proposal caused Highways England to raise a number of concerns over Moto's suggestion that the carriageway of the roundabout and the M3 be widened. The two have worked together for some time, and Highways England (since renamed) no longer have any objections.

The plan to build a service area at Black Dam Roundabout was submitted shortly after Applegreen investigated the possibility of building a service area two miles away at Kempshott. Applegreen haven't followed up their proposal since.

A number of residents have raised concerns about the environmental impact of the service area, its impact on traffic, and whether there's actually any need for it. The MP has objected, and Basingstoke Transition Network has stated it would contribute to climate change by increasing traffic on the ring road. Current regulations don't require a new service area to prove that it is needed, it just needs the operator to deem it to be commercially viable.

The plans submitted by Moto include space for Greggs, M&S, WHSmith, Burger King, Arlo's, four retail units, one food unit and two Costas. Some of those will have changed since - Arlo's is very unlikely, while KFC would almost-certainly be there. There would also be a separate drive thru Costa with seating, a petrol station, a hotel and a dog walking area.

The building resembles a much smaller version of Cherwell Valley, with a small walled garden and a small seating area at the front, besides the large glass windows. The roof would rise up to allow for a small staff area on the first floor.

There has been no suggestion that National Highways would relinquish the motorway regulations on the road to Black Dam, creating the unusual situation where a place is surrounded by motorway regulations despite being accessible without touching the mainline of a motorway. Maidstone is another example.

Current plans are available from Basingstoke and Deane Borough Council, as is the option to comment on the proposal. Although the proposal has been outstanding for an incredibly long time, as of 2022 it is still in the planning system.