Hilton Park services was built and ready to open in 1967, but as the motorway south of here wasn't ready for another three years, the whole site was kept closed and fenced off until 1970. This prevented it running a loss during the quiet period, although cash-strapped owners Top Rank were frustrated and eager to get going.

The Ministry of Transport had suggested just the petrol stations be opened, but this idea was declined by the operator.

The name Hilton Park derives from the name of the nearby stately home, who's land the facilities were built on. This was itself named after the nearby village of Hilton.

Hilton Park has a lot to answer for. Its location is the main reason why M6 J10A only faces south, and it has also meant that a whole new dual carriageway has had to be proposed to link the M54 to the M6 Toll. For a while the service area was proposed to be closed so that junction improvements could take place either side.

Closing it would have been a problem, because the next service area is 30 miles away for traffic for the south-east and 50 miles for traffic for the south central. Considering this and just how busy this part of the M6 is, it's no surprise that between 1988 and 1997, Hilton Park was repeatedly noted for being the busiest and most profitable service station in the UK. The opening of other nearby service areas, like Stafford in 1999 and Norton Canes in 2004, seems to have brought Hilton Park down the league table slightly.

Its awkward location has also meant that the M54 needed its own service station - Telford.

The original identified site for the service area was at Essington, where two half-sites would have been provided albeit not perfectly opposite. The site was described as "an unattractive area" and it was too small, but it was decided to be all that was available. It would have required local roads to be diverted.

The Staffordshire County Planning Committee and Local Planning Authority both objected to Essington, and the National Coal Board wanted to begin opencast operations here. Sir Owen Williams then identified Hilton Park, and presented it as the only other suitable option.

A large area was zoned for Hilton Park, allowing for a thick wall of trees to screen the services from the surrounding area. The Ministry of Transport spent £294,000 on preparing the site.

A month after Trowell, the contract for Hilton Park was opened to tender at the end of 1963. The close contract dates proved to be a mistake as it meant rejected entrants couldn't be given feedback to improve. Forte, Blue Star and Granada were forbidden from entering as they owned the neighbouring service areas. Instead, the following bids were received:

The problem with Regent's design was that it could have been placed anywhere. Even then, the Ministry, and the local planning departments they had to succumb to, preferred layouts which were sympathetic to the local environment and made the most of the landscape.

Blue Boar, who already owned Watford Gap, had a financial proposal which was very poor, and its design work was very vague. This is all we know about it.

The Ministry didn't want a bridge-restaurant at this site as the two sides were geographically very different, meaning symmetrical facilities wouldn't fit in. Bridge-facilities were falling out of favour anyway, with one civil servant citing the glare that they would cause. This, coupled with largely monochrome buildings and a poor financial offer saw the group's bid thrown out quickly.

Of the proposals offered so far, Mecca's was the first to be taken seriously, with some decent design work and a good financial offer. Their only failing was that their restaurant had seven times as many restaurant seats as it had car parking spaces.

A month before Hilton Park, Mecca Leisure had won the contract for Trowell, which they went on to make their own with, using entirely local branding and themes. The Ministry had learned from past experience where operators had struggled to build two service area at the same time, and considering Mecca's inexperience, they did not want them to bite off more than they could chew.

An artist's impression of the final design, the winner by default

Known for their elaborate architecture, Rank didn't disappoint. Concerned that their covered footbridge would feel like a tunnel, Rank had the unique idea of putting a tea bar in the middle of it. The Ministry found the idea ridiculous: difficult to walk past, distracting to drive under and not of interest to anybody. Rank then asked if they could build a bridge which was wider at the centre than at the ends, and were again told to stick to serious proposals. They considered turning the bridge windows into motorway viewing platforms.

The tower was even more controversial. It wasn't tall enough to see over the trees which masked the good view to the west, but it was so tall it could be seen from afar in the east where there wasn't a view particularly worth talking about. They had to significantly reduce the height of it to get it approved. Indeed the whole building was described as "unnecessarily high". The original proposal included tiered seating in the tower-restaurant to offer everyone the optimum view - but not a view of anything in particular.

To add insult to injury, the petrol filling stations were placed before the car parks. Although that's a trivial design issue, it flew in the face of the last five years of service station feedback.

The north restaurant had 380 seats, south had 120. There were 370 parking spaces. It was designed by London-based architects T P Bennett & Sons, who had also designed Forton. By each building there were long covered walkways extending to the coach park.

Only Mecca and Rank's proposals were taken seriously. Although Top Rank's was seen as being very flexible, the offer was marginally poorer than Mecca's.

Unbelievably, it was the fact that Mecca were already building a service station which caused them not to get this contract, despite Rank already owning two of the four existing services on the M6 and despite Rank's inferior offer. Construction cost Rank around £1m. 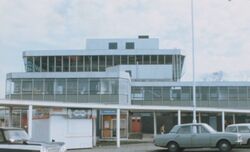 The northbound building in 1975, demonstrating its grey appearance.

Each side of Hilton Park has a distinctive tower-shape. At first both towers held restaurants; northbound offering a panoramic view enhanced by the tiered seating.

The staircase for the northbound tower is still used to access the bridge, but you cannot reach the top. On the southbound side the toilets are on the second level beneath the tower, with a second staircase being used.

In the main restaurant, a small buffet table was by the window alongside a sweet trolley. Paintings by a local artist were hung up and available for purchase.

The northbound restaurant moved down from the tower to a former patio area as early as 1971, citing low trade. Both former restaurants are now closed off and stripped empty, with only a few original fittings remaining. If this story sounds familiar, it's because Rank did it again on a much larger scale at Forton.

Profits continued to be low until the 1980s. To celebrate the turnaround in fortunes, a major refurbishment was carried out in 1982, costing £1m. The building was painted beige in this era.

The Motor Lodge was built at the back of the southbound service area in late 1988. In the same year an "executive bathroom" was built, with shower facilities (which were considered quite novel at the time).

Given its high traffic levels, Pavilion would consider Hilton Park to be worthy of major investment after they took over Rank. In 1993 the northbound side had a Burger King, a Tie-Rack shop and a Thorntons, as well as the trucker's café, along with a shop and restaurant on each side and a southbound snack bar. They moved the southbound forecourt to its present position, and removed the covered walkways.

Fuel was provided by both Shell and Esso at the time, and the building was painted bright green.

Pavilion were keen to promote their facilities for HGV drivers. They also held promotional events, including one where a beach (with deckchairs, ice cream and donkeys) was placed in the car park, and another where massages were offered. In 1995, Pavilion opened the UK's first motorway pharmacy. 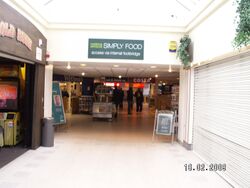 A choice of facilities on the southbound side.

Between 1988 and 1997, media reports repeatedly claimed that Hilton Park was the busiest service area in the country, and sometimes in Europe. This meant it had a lot of retail potential.

Granada made it their first "mini-shopping centre". This extension made it the first site to gain a Cyber Café, and the last to get a Trucker's Lounge. Neither of these facilities are still available, instead they are partitioned off and used as office space. The building was painted white, and the forecourt was converted to BP.

Following their refurbishment, Granada renamed Hilton Park to 'Birmingham North' in June 1996, arguing that more generic names would be more memorable, easier to advertise and would deter rivals from opening nearby. One columnist in The Observer complained that the name change was the work of "meddling bureaucrats", while the Burton Mail said it was done by "some anonymous minicrat". Meanwhile locals were bemused because the newly-renamed 'Birmingham North services' wasn't in Birmingham.

Granada had planned a long list of name changes that would follow Birmingham North, put following the poor reaction, they quietly changed its name back to Hilton Park in 1997.

At this point, shops in the southbound services included Superdrug and Thorntons (again; now nearest the door), The Sock Shop, Tandy Express and Clinton's. There were plans for a second storey to be added to the car park, creating a second storey entrance too. That didn't happen, but the Tandy Express became T2 and a northbound T2 opened in 2002.

The northbound extensions have removed all evidence of the original entrances, both for cars and HGVs.

For a few years from 2000 the bridge between the two sides was closed. A court appearance later confirmed several companies had been fined for asbestos discovered in the bridge while it was being refurbished.

A Costa Drive Thru was planned for the southbound service area in 2018, but this proposal wasn't pursued.

It is still a mystery as to why Hilton Park services grew to be so successful, when Frankley down the road hasn't been so lucky. Its position close to one of the UK's most notorious traffic bottlenecks will be a factor, as will its wider variety of takeaways, both of which will have contributed to its success, but that doesn't account for such a dramatic difference in fortune.

On 16 January 1975, there was a clash between supporters of Aston Villa and Manchester United. Considerable damage was caused to the service station and 130 people were arrested. Rank said they were surprised by the clash, but it would become a notorious problem for service areas.

A controlled explosion was carried out on an unattended suitcase in November 1976. As Hilton Park was a very busy transport hub, it had to be on high alert during this difficult period for the transport industry. There had been a genuine device planted at Newport Pagnell on the M1 just a few months earlier.

On the afternoon of 21 November 1980, BBC Radio 2 broadcast live from the services with Sheila Tracy talking to truckers.