Newport Pagnell is the oldest motorway service area in the country - although it doesn't like to admit it. This page explains how it was built.

After the Ministry asked potential operators which of the five potential M1 services would be best, it was decided they would be at Redbourn and Watford Gap. This left a large gap between facilities, so it was decided to build a forecourt at Newport Pagnell.

In a last-minute twist, residents objected to the Redbourn plan, so with little time left it was decided to build a full service area at Newport Pagnell instead.

As another late change, it was decided to put a maintenance compound in the services, reducing the already small plot allocated to it.

64 interested firms were sent details of the planned services, and six responses were received. The tenders needed to show two transport cafés, one restaurant, a filling station and a repair bay. They were examined by the motorway's engineers, alongside experts in finance and catering.

The minimum spend allowed on the services was £50,000. The government agreed to fund a bridge on condition it was at right angles to the road.

This design came from a catering firm who had no garage experience and little financial backing. It was at least a good building design, with considerable detail, and a good layout. It showed a two-storey restaurant with space for expansion.

Their investment was good but not good enough, their proposed rent formula was good but only if you assumed sales would be low.

The traffic flow in this plan was described as "torturous", with petrol by the entrance. Sir Owen Williams criticised it as for not leaving space for expansion, calling it "inflexible".

Airborne submitted a good design, but the firm couldn't demonstrate much experience. Their building designs scored well even if they were a bit small, and their traffic layout was poor.

This design was clearly more interested in the petrol station, with all traffic directed through it. It had a restaurant at bridge-level (not making clear whether it would be on the bridge or just next to it). Their design work was otherwise good.

BET's rent offer was particularly poor. Their design was clever because it was mostly car parking, which the Ministry would be paying for.

They proposed small buildings with a transport café separated within the main café. Their specification was not particularly detailed. 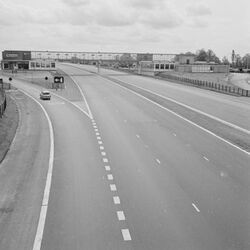 Motorway Services Ltd were a union between Fortes and Blue Star which arose during the early consultation phase, with both firms keen to promote their own names. Their rent offer was average, with the new company evidently being short of funds.

The design was clearly aiming to impress wealthy motorists. They had ignored the requirement to have two transport cafés and instead proposed two cafés to seat 200 each - the same thing but with a more classy name, as it was actually barely a snack bar. The main restaurant was expensive and American-styled, serving food at counters and tables.

The building design scored well, even if the toilets were hard to find. On the footbridge, Fortes proposed a glass roof and picnic tables so motorists could enjoy the exciting view of speeding traffic.

With little time left before the motorway opened, the Ministry asked Blue Star to get an emergency petrol station ready as soon as possible. They managed to get something described as "reasonably attractive" open on 2 November 1959 with a recovery truck, a small filling station and a temporary toilet block.

Once that was open, attention turned to the permanent buildings. With staff working overtime Fortes could have been ready to get the amenity building open by April 1960, but the Ministry wouldn't have been ready with the car parks in time.

The site of the services was larger than initially envisaged, causing the Ministry to exceed their £300,000 budget. 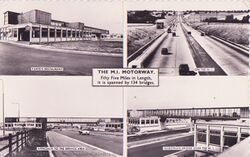 A postcard promoting the motorway and the services.

Fortes were under strict instruction to make the building dull and to separate it from the main carriageway with a lot of trees. When the government came to make their final inspection, they found that both rules had been broken and the site was seen as a "possible distraction" to drivers. Despite this, the services continued as normal and like most services, it has since attracted much more gaudy advertising.

Under the rules at the time, advertising should have only promoted Motorway Services Ltd, but an exception was made to allow both the Fortes and Blue Star names to feature.

"It seems that every local woman with time to spare has a sudden urge to take up catering."
Forte News, 1960.

200 staff were employed to work at the services. They were mostly local and mostly female, as Fortes' internal newspaper remarked in a special edition celebrating the opening of the services.

Fortes were allowed to apply for a licence to serve alcohol with food. This application was rejected, which generated considerable negative publicity. The operator argued their fine-dining would never be successful if alcohol couldn't be served. Motorway service areas were soon forbidden from applying for alcohol licences, while Fortes later created a de-alcoholised wine for their customers at Newport Pagnell.

"Sensibly devised dishes which you can eat at the counters in full armchair comfort served as if you sat at a traditional restaurant table."
Egon Ronay, 1961

The services were almost immediately seen as being too small: on 12 November 1960 - less than three months after opening - they were drawing up plans to double the number of toilets provided.

In the 1960s, Fortes wanted to build a lorry park near Milton Keynes. This and the services would have then been able to promote and relieve each other, and the lorry park would have had the additional benefit of being outside the government's tight regulations.

Despite the service area initially being a hit with new motorists, internally Motorway Services Ltd were causing concern for the Ministry because they were slow to deal with problems and had a habit of ignoring regulations.

When the service area opened they formed the head office of certain segments of the Forte business, and today Welcome Break's head office is only a few miles away in the nearby suburb.

There was a serious incident at the service area on 7 March 1976, when an IRA bomb was planted in a holdall left in the northbound car park. AA patrolman Charlie Hough spotted the device and moved it away from the building. It detonated 10 minutes later, causing no injuries but damaging nearby vehicles.

The southbound entry slip road has been particularly sharp since it opened, and consequently it has seen a number of accidents, the most notorious occurring in September 2007 when a coach overturned, injuring 30 people. (The BBC website has more details.)

The first complaint about this road was made in 1960, by Motorway Services Ltd and then by Autocar Magazine, both claiming it was dangerous. 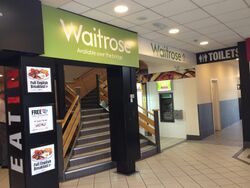 Due to a lack of space and changes in demand, the services quickly moved away from fine dining. The café was a large, carpeted room with fixed wooden seating by Formica-topped tables, overlooking the motorway. There was an Italian-tiled area by the servers and slot machines lined the narrow entrance.

The restaurant has moved through phases of favourable and unfavourable reviews; Egon Ronay was initially impressed.

In the toilets was an attendant, free towels and electric hand drier (all novelties at the time). The parking was criticised for being "messy".

The housing estate right next to the southbound services was built in 1962. At the time there were very few houses so close to motorways. Initially the houses sold well, but the residents quickly moved out and few wanted to replace them. Strangely, Blue Boar wanted to build their own houses at Watford Gap.

By the 1990s the northbound side was larger of the two, with a Little Chef restaurant and a Thorntons shop.

In September 1990 Fortes invited Prime Minister Margaret Thatcher to an event celebrating 30 years of motorway services. The Ministry of Transport warned Fortes about such an event, claiming it was a breach of their contract. Cecil Parkinson MP instead attended a much-scaled down event, although traffic congestion made him run late and a speech about the future of the motorway network was ironically cancelled. According to the press release, a time capsule was buried in the northbound services, although no other record of this has been kept.

Newport Pagnell had one of the first hotels on the motorway network. Although it is immediately adjacent to the main service area, it's built on land that is technically not part of it. For this reason it was exempt from many of the motorway service area regulations, which made the Department of the Environment uneasy.

The hotel was thought to have opened in 1971. It used a building style that was inspired by American motels. It was branded TraveLodge.

After Welcome Break split from Granada, the Newport Pagnell hotel was rebranded Welcome Lodge. Many of these were soon changed to Days Inn, but Newport Pagnell hung on, perhaps because of its ageing building. In 2004 there was a plan for the motel to be rebuilt in a new location in the south-west corner, but this didn't happen. Had it moved the old land would have been sold for housing.

The Welcome Lodge finally became Days Inn in April 2009. In June 2016 it was rebranded again, and after extensive refurbishment work, it reopened as a Ramada.

In Spring 2021, Which? Magazine calculated a 41% satisfaction score for the service area, placing it 3rd-from-bottom.

In Spring 2018, Transport Focus calculated a 92% satisfaction score for the northbound services and 81% for the southbound services. In 2019 this changed to 88% and 89% respectively.

In 2015 and May 2012, VisitEngland rated the services as 3 stars. In August 2011, they gave the northbound services as 2 stars and the southbound side 3 stars.

In 2008 the services won a five star loo award.

In 2007, Newport Pagnell northbound won a five star loo award. The southbound side won a four star one.

In 2006, both sides of Newport Pagnell won a four star loo award.

It was here in 2000 that Egon Ronay supposedly made his infamous breakfast review, "it's called 'all day' because it tastes as if it had been hanging around all day". In the actual report he attributed the quote to a colleague.

In 1991, a Which? survey recommended the services.

A 1978 government review described the services as "crowded and grubby".

In 1977 Egon Ronay rated the services as "just acceptable", saying it looked worn and made heavy use of pre-cooked food.

In 1961 Egon Ronay was full of praise for Newport Pagnell, telling motorists they could "stop with confidence". This favourable opinion did not last long.