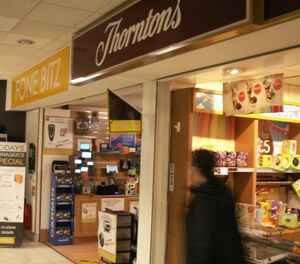 Thorntons is a brand of chocolatiers who had a long run on the motorway network.

However, unlike other shopping names, some of the Thorntons stores survived until 2011. The last store was removed from the new Cherwell Valley, where it had replaced a previous store.

Thorntons used to be found at the following services: