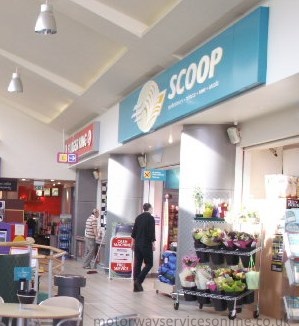 Scoop was a small, corner-shop styled, self-branded convenience store established by Granada and handed down to Moto.

It was created by BDG McColl to give the brand enough presence to stand alongside the other big retail names that Granada were introducing to their service areas. This suggests the aim was to eventually remove the anonymous 'Shop' brand that was used as service areas across the country.

Scoop would be found within a block of retail units, and was eventually phased out, with the final one being removed from Cherwell Valley in 2009. It was being replaced by M&S Simply Food (which is much bigger than a typical convenience store) and WHSmith.

Scoop used to operate at the following service areas: