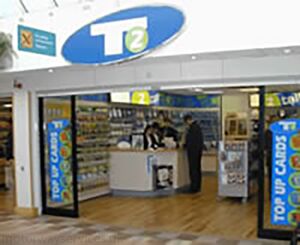 Only one photo tagged with T2 at services. If you have one, why not upload it?

T2 were a modern revolution, making SIM cards and battery chargers available to people on the move. In addition to mobile phone accessories, they sold televisions, children's toys, travel kettles and minidisc players.

Their stores (and even their name) were based on the defunct Tandy chain, and actually T2 was managed by former Tandy staff and used stores which had been purchased from Tandy's new owners in 2001.

Their locations were across the Moto network, and at Liverpool Airport, Morecambe, Bridlington and Wrexham. The Woolley Edge, Tamworth and Hilton Park stores were created by T2, but the others may have been inherited direct from Tandy.

As their products became more widely available, T2 fell on to the back foot and Moto decided to remove their stores in favour of other shops. In 2005, their focus changed from selling popular products to hard-to-find products. Shortly afterwards the company closed all its stores, and the website was sold to a new business, which has itself closed.

T2 used to operate at the following services: