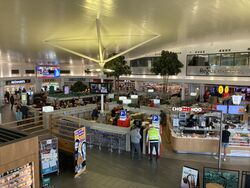 When the M25 opened through here in 1983, no service areas were provided. Poynters Farm (positioned immediately west of Cobham) was one of many possible sites which were considered, but the Department of Transport were never able to settle on a plan in time.

Instead, it was decided that the M25 would have four service areas, which were expected to be suitable until 2015.

Just building three turned out to be a real challenge, so the fourth service area took a long time to materialise. No progress had been made by the time service area planning was passed to the private sector. 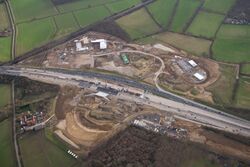 Roadworks to make space for the services.

The planning application for Cobham services was submitted in 1995, under the name New Barn Farm. This was taken to the 1999 public inquiry alongside a number of service areas proposed for the M25 and the M4. This ruled that Cobham should be built.

The public inquiry decision was quashed by the High Court in 2000, as it was decided the alternative options hadn't been given due consideration. Another public inquiry was held in 2002 alongside more service areas proposed for the M25, M4 and M40.

Elmbridge Borough Council tried to argue that any new service area should be built in Buckinghamshire instead. The Secretary of State concluded that Cobham's "serious green belt objections" were outweighed by the "compelling need" for a new service area on the M25, concluding that "the time for putting off the decision has long since passed". John Prescott once again granted planning permission for Cobham, as well as Beaconsfield.

Bringing Cobham to fruition was a huge battle for Extra, and may have been a factor in the company going into administration in 2010. Considerable investment was required to modify the M25, and to build such large parking areas and buildings. Fortunately for them it has proven to be even busier than expected, and it is now their greatest asset.

The outline proposal showed a smaller amenity building surrounded by parking, with an entrance at each end and a separate lodge to the side.

By the time it was fully developed, it had been decided that Cobham would have a very large food court, modelled on Extra's other service areas.

In 2016, significant changes were made to the road layout at what used to be a standard roundabout used to enter and exit the services. While the original layout was praised for its efficient and simple design, it proved to be crippled by the heavy weight of traffic and by motorists forgetting which direction on the M25 they were using.

As a result, the new layout has many signs, each with a heading pleading "PLEASE GET IN LANE". It has moved away from the standard road signs which met the official standards, to its own take including roundabout map signs that don't show you which side you're approaching from and direction signs with no arrows. The direction of the former coach park was reversed and a lengthy new exit route was created. A new coach parking area has since been created by the hotel. 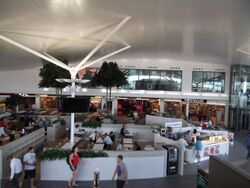 When the plans for the services first went public, the services were going to include an LP4 restaurant and an Etap Hotel but these were replaced by Welcome Break's Eat In and Days Inn respectively. This was the first time one operator's own creation has been introduced to a rival service station. The Eat In restaurant was the last remaining Eat In restaurant to close on the motorway network in June 2015. It was replaced by Harry Ramsden's, Papa John's Pizza and Tossed which all opened on 7 July 2015. A Costa Express machine and Krispy Kreme counter could also be found in this area.

The Starbucks café, which was the largest in Europe when it opened, is also operated by Welcome Break.

The services used be the only services to offer both Starbucks on the Go as well as Costa Express machines, both under one roof.

A Nando's restaurant opened here on 29 November 2017 in a new extension to the main amenity building.

The forecourt is Shell's flagship site, and is often a first to trial new ideas, such as hydrogen fuel sales. It has won 'Best Motorway Service Outlet' four times at the industry's Forecourt Trader Awards. The hydrogen facility was retired in October 2022.

In January 2019, Shell introduced a flagship deli by Shell counter at Cobham. In March, Carvery Express closed to make way for an extended Chozen Noodle unit.

A new Pizza Express, which is operated by Welcome Break, opened in March 2019 and can be accessed from either the front of the main building or internally between Starbucks and Leon, as it is based in another new extension between the main building and the hotel.

In June 2019, A Changing Places toilet was installed. In summer 2019, the Days Inn hotel here was rebranded to Ramada. In autumn 2019, the WrapChic store was replaced by Tapori along with their other store at Beaconsfield.

In January 2020, Welcome Break closed their Harry Ramsden's and Tossed units. The seating area for these units was replaced by a Leon unit which opened on 10 September 2020 and is operated by SSP. The Harry Ramsden's and Tossed units were replaced by a Sourced Market which opened on 20th October 2021. Sourced Market later closed in February 2022 following the company going into liquidation.

An opening ceremony was held on 6 October 2012.

A fire broke out in the amenity building in April 2015. The main building was closed for a few days, with all customers being directed to the forecourt. The KFC remained closed for much longer while repairs took place.

On the evening of 21 February 2016, the service area was forced to close after invitations to an unofficial car meet went viral on social media. Over 3000 people descended on the service area, causing severe tailbacks on the M25 and filling the car park.

The service area received a lot of media attention in June 2017, following a serious assault in the petrol station.

On 26 July 2020, police again attended a car meet which was causing delays on the M25; just a few weeks earlier, Surrey Police reported that they had attended a different car meet where damage had been caused. Surrey Police attended a demonstration in February 2022 because it was disrupting the motorway.

There was further media and police attention on 28 April 2022, when protesters blocked access to the filling station at Cobham. The pumps were vandalised and the site was disrupted for several days. They were vandalised again on 24 August 2022.

Despite what it may seem, this section is not attempting to list every police visit to the service area, and there will be many more which haven't been shown here. Service areas are like towns in their own right and unfortunately this does mean that police attendance is sometimes needed. What's unusual about Cobham is that so many of these events have been very newsworthy, partly because it doesn't take much to cause congestion on the M25 anyway.