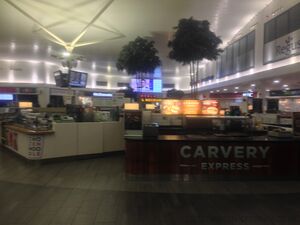 Carvery Express was an express carvery service and sandwich chain which was first introduced by Extra to Beaconsfield in 2013.

In late 2015, Roadchef introduced Carvery Express to Watford Gap, and also added another site at Clacket Lane. These were both removed in late 2017 following unsuccessful trials. The units at Beaconsfield and Cobham were then removed in 2019.