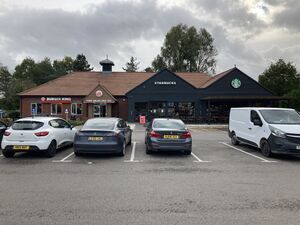 One of the only purpose-built, full service areas on the A23. 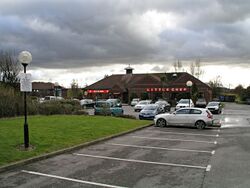 The Little Chef restaurant building in 2009.

The Hickstead junction on the A23 used to offer easy access to The Castle Hotel and a 1920s garage, which in the 1970s became a full petrol station accompanied by a branch of Little ChefHistory; for a while it was Little Chef's biggest restaurant. There was a plan to add a hotel here but it didn't happen.

In the late 1980s, plans to upgrade the A23 here were proposed, which involved demolishing the garage and Little Chef. In response, in 1988 Trusthouse Forte started submitting plans for a new, much larger service area in the opposite corner of the new junction. Their original plan included a new filling station and Little Chef restaurant, which would include a Coffee Stop shop alongside a new hotel and tourist information centre. A revised option had no hotel and was approved. A final proposal, dated 1991, reintroduced the Travelodge adjusted the site layout; this was approved on appeal.

While Forte were planning this service area, BP proposed their own larger development at the next junction up, Bolney. That plan was refused in favour of this one.

The service area finally opened in 1993 with the relocated branch of Little Chef alongside a Shell filling station and a 40-bed Travelodge hotel. The filling station later became known by Shell as Ricebridge, but they have since returned back to the generic Hickstead name.

The restaurant gained an extension in 1998 which saw the Coffee Stop turned into a Burger King. The Travelodge also received a 40-bed extension in the same year.

The Little Chef closed in 2017 as part of Euro Garages' shutdown of the brand, with the restaurant being converted over the summer and being replaced with a Starbucks in September 2017. This was one of two Euro Garages trial sites for a Starbucks to be situated adjacent to a Burger King. Upon inspection from senior managers at Starbucks, they decided not to let Euro Garages continue to roll out Starbucks adjacent to Burger King, which ultimately delayed the conversions from Little Chef elsewhere and led to the development of the mini-foodcourts at other former Little Chef sites.

Shell installed four Shell Recharge electric vehicle charging bays on the forecourt in 2022 but they are yet to go live.