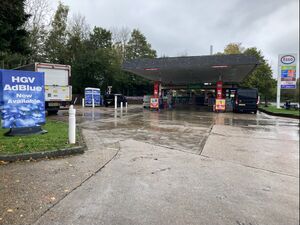 A23 northbound between Crawley and Brighton

This forecourt is the only significant feature of the Bolney exit on the A23.

The petrol station was built next to the northbound A23 in the 1940s. At the time there was a Jeremy's Farm, which inspired Jeremy's Lane, Jeremy's Cottage and Jeremy's Corner - so Jeremy's Service Station seemed to make sense.

It's not related to the Bolney branch of Little Chef, which was built further down the A23 near Rice Bridge in 1981.

Fuel was provided by Texaco with a Star Market store until 2010, when it changed to Esso. The site was acquired by MRH in 2013 who added their own brand Hursts Grab & Go and a Stone Willy's Kitchen concession to the site in 2016. MFG later acquired MRH in 2018 and rebranded the shop to Londis in 2020.