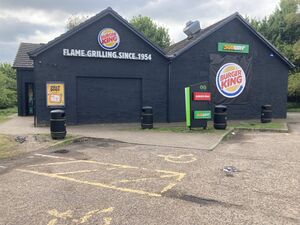 In the shadow of the Thickthorn park and ride is this small service area. 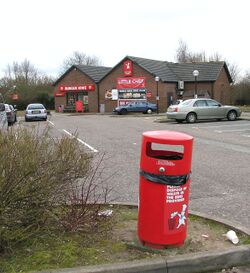 The site was built in the early 1990s at the same time as the Norwich Bypass, and is widely known as Norwich services.

Forte built the service area as a restaurant, hotel and forecourt operation. The site opened with the new Norwich branch of Little ChefHistory alongside a Travelodge hotel and Fina filling station. The Little Chef went on to gain a Burger King and in 2002 it became a Little Chef Choices, gaining a Harry Ramsden's and Caffè Ritazza. These were later removed.

The forecourt became a Total filling station. Total sold it to Shell in 2012 as part of their nationwide shutdown.

The restaurant building was acquired by Euro Garages in 2017, along with the rights to use the Little Chef name for a year. No plans were put in place to replace it so in 2018 it had to become EG Diner. The building closed in October 2018 for refurbishment, reopening in December 2018 with a refurbished Burger King and new Greggs and Subway stores.

3 IONITY electric vehicle charging points were added to the Shell forecourt in October 2021, with plans for a further 3 chargers at a later date.

A McDonald's opened opposite the service area in early 2018 but this isn't part of the signed service area, and instead competes with it.