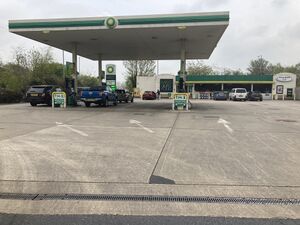 The UK's most easterly official service station is positioned on New Road in Acle, close to the A47. 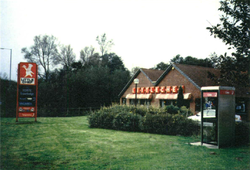 As well as being Britain's most easterly service area, Acle is also believed to be the lowest, with its building being just two metres (six feet) above sea level.

Rydal Garage and caravan centre had been positioned here since at least the 1970s on one of the main roads out of Acle. In 1973, the garage was joined by the Acle branch of Little ChefHistory.

By the mid-1980s, a new bypass was being built to the south of Acle village meaning the A47 would no longer directly run past Rydal Garage and the Little Chef. As a result, Trusthouse Forte set about planning a new service area, positioned closer to the new bypass at a new roundabout where the A1064, the new bypass and the Acle Straight would all meet. The new service area opened in around 1989 with the old garage being demolished to partially make way for a new 40-bed Travelodge hotel (the remaining part is now the wooded area behind it) alongside a new Texaco filling station, operated by Malthurst, and the new Acle Little Chef.

The forecourt later became a Q8 site in 1998, where it was also joined by a Xpress Budgens store. There were also plans in the same year for the Little Chef restaurant to receive an extension to gain a Burger King restaurant but this didn't happen.

The filling station went onto become a BP site in 2005, retaining the Xpress Budgens store. The store was changed to a SPAR store in 2008 following Malthurst's transition to MRH. The Travelodge also received a 19-bed extension in the same year.

BP Express acquired the filling station in 2014 and redeveloped the forecourt. The new forecourt reopened with a M&S Simply Food store and Wild Bean Café in a new, larger sales building which saw the removal of the car wash.

A Burger King had been due to join the Little Chef here as part of a refurbishment in 2016 but this never happened. The restaurant was acquired by Euro Garages in 2017 and was one of the first to close in March 2017. The restaurant was replaced with a Starbucks store which opened on 21 July 2017.