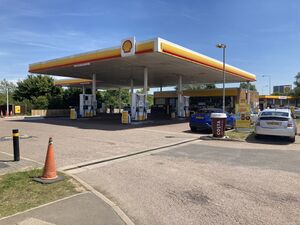 A5 at Milton Keynes
(also accessible to traffic on the A4146)

A McDonald's on the outskirts of Milton Keynes, commonly known as the Kelly's Kitchen junction. 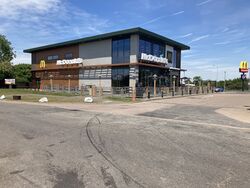 Plans for a filling station and 80-seater restaurant here were first approved in 1986. The site opened in 1989 as a Kelly's Kitchen restaurant with a Petrofina forecourt, positioned next to the roundabout. They were positioned on the old alignment of the A5 prior to the Fenny Stratford Bypass opening earlier that year.

The restaurant soon became the Milton Keynes branch of Little ChefHistory. It later became a Little Chef Choices site, which saw it offer Caffè Ritazza and Harry Ramsden's too. The Little Chef was one of many which closed in 2012, and was demolished before becoming the car park of the new McDonald's.

Also in 2012, the forecourt changed from Total to Shell, with Shell calling it 'Milton Keynes South'.

Despite their restaurant having closed in 1991, the roundabout is still known locally as Kelly's Kitchen. There was even talk of having that name added to road signs.