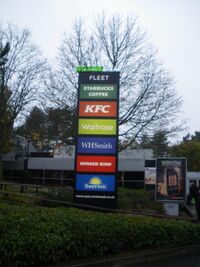 A sign promoting brand names, most of which are franchised.

A franchise (also known as symbol group) is a business deal where the brand holder allows another company (the franchisee) to use their brand name.

The franchisee takes the financial income from the business whereas the franchise owner has the guarantee that the franchisee will only sell its products, thereby generating profits from the wholesale of goods to the franchisee. In order to maintain the value of the brand the brand owner will ask that certain levels of standard are maintained.

Franchises and licensed brands have been used by most of the motorway service area operators in order to maximise profits since the 1990s. For the brand holder, it increases their exposure and coverage while avoiding the need to get involved with precise details such as renting land and hiring staff. Customers would rather use a brand they are already familiar with, which means the operator is likely to see more custom. In fact, the wide variety of franchises has made some service areas especially popular with a new generation of fans, something which hadn't happened since the 1960s.

This means the majority of the outlets in motorways services are not actually who the general public think they are; they are just the operation of the service operator. This avoids the situation where you have several different companies (each with their own management in a separate head office) all having to manage one building.

The exact arrangement can vary, but staff and pricing will almost always be the responsibility of the franchisee, who should be the first point-of-contact if the customer has any concerns.

When they first started, Extra insisted that they would keep costs down by not using franchises. While it is true that they don't operate any, others do on their behalf.

Franchising can also used at A-road services. It used to only really be found in the forecourt and around its shop. Now, it's common to see franchised Starbucks shops built from scratch, in their own building.

One of the main benefits of franchising, which often gets overlooked, is that the franchisee does not have to invest in its menu. Brands like Starbucks and McDonald's are continually adding new and highly-anticipated items to their menu, so the franchisee doesn't need to spend any time coming up with new ideas or promoting them.

One downside to franchises became apparent during the 2020 COVID-19 outbreak. Many big brands made announcements such as special offers for NHS workers, or a total shutdown of all stores. These announcements didn't affect service station franchises, but customers weren't to know that, and it put pressure on the franchisee to take part. Moto eventually had to create their own restaurant - defeating the point of franchising - so that they could still serve food while the franchises were closed.

Further problems were counted in the following year, where many food brands experienced supply issues with specific products. This affected all their branches, including the ones in service areas.

A sample of the types of franchises seen on the road are included below: