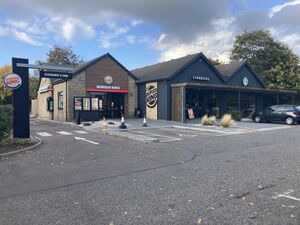 Its very rare to find a Starbucks and a Burger King sharing the same building, but the Ely Bypass offers exactly that delight. 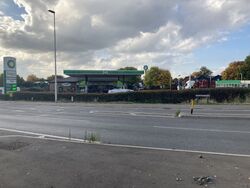 Plans for a service area here were developed as part of the A142 road improvement scheme in the early 1980s, which saw a new bypass be built around Ely. Details of the service area first emerged in 1988 when a filling station and 80-seater restaurant were proposed. A much larger plan was proposed in 1989, with a restaurant, 32-bed hotel, tourist information centre and parking for all vehicles being proposed.

The service area eventually opened in 1991, with a filling station known as Witchford Road service station, the Ely branch of Little ChefHistory and a Travelodge hotel all positioned in the corner of a roundabout on the brand new Ely Bypass.

The Little Chef restaurant was later extended in 1998 to add a Burger King franchise but - unusually for a Little Chef - it had full drive thru facilities. The Burger King was later removed - the drive thru had its signs taken down but otherwise it still looked open - and the unit was advertised for let. A Coffee Tempo! was also later added to the restaurant.

The Little Chef was given another small refurbishment in 2012, which saw the Burger King drive thru re-open and a Little Chef Express added.

After being purchased by Euro Garages, the Little Chef closed in 2017 and became a Starbucks. This was one of two trial developments, whereby the Burger King continued to trade next door. Starbucks were ultimately unimpressed by the arrangement and prevented any more Starbucks-Burger King combination sites opening, a decision which ultimately delayed the closure of many other Little Chefs.