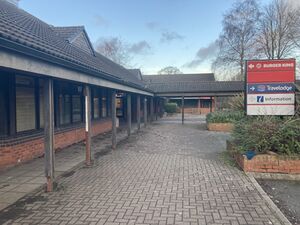 A5 at Oswestry
(also accessible to traffic on the A483)

A large service area on the edge of Oswestry, where the A5 was recently realigned. 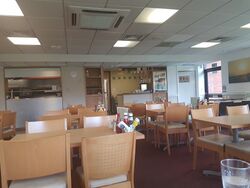 The Oswestry Bypass opened in December 1986. Before it was finished, Esso had already proposed a service area the previous year, which would have had a tourist information centre, restaurant, filling station, shops, hotel, caravan park and parking areas.

The service area opened in 1987 with most of those facilities. The hotel was branded Little Chef Lodge and the restaurant was the Oswestry branch of Little ChefHistory. The tourist information centre was built with a spire making it look like a typical supermarket of the time. The hotel soon changed to the main Travelodge brand.

The restaurant went onto gain a Burger King in the 1990s and in 2001 became a Little Chef Choices, which saw it gain a Harry Ramsden's, Upper Crust and Caffè Ritazza. Those were later removed, but Coffee Tempo! was added.

The forecourt previously included Esso's Snack & Shop branding. In early 2009, the filling station site was redeveloped with Esso reopening the site in spring 2009 with the new sales building featuring their On the Run café and Costa Coffee offering.

The tourist information centre closed on 16 July 2016, after funding was withdrawn by the local authority. The building now sits empty in the middle of the site.

A large 'Mile End Services' totem pole had been positioned at the entrance, advertising the brands available on site. The Little Chef and its Burger King were acquired by Euro Garages in 2017, meaning they now operated all the facilities except the hotel. As a result of this, Euro Garages replaced the 30-year old totem pole with their own, with their prominent green 'EG' lettering at the top.

Euro Garages only had limited use of the Little Chef brand. It had been expected that they would replace it with a Starbucks, but Starbucks wouldn't have wanted to share the building with the Burger King. As a result, the Little Chef ran out of time and had to be changed to the temporary name EG Diner. The EG Diner closed on the 28 October 2018, and was left empty.

EG Group intended to majorly redevelop the site, but no progress has been made since the A5 was realigned away from the Mile End Roundabout.

Euro Garages' first presence at Mile End was the opening of a KFC Drive Thru and Starbucks Drive Thru in May 2013. This wasn't part of any official service area, and competed with the main facilities. Their development was joined by the Oswestry branch of OK Diner, which was moved here from Stourbridge, in 2017.

J Ross Developments planned a mixed-use development on the land to the south-west side of the Mile End Roundabout in 2016, with provision for several units.

With the A5 being realigned away from the original roundabout, there is further potential for this area to expand with new developments in future.