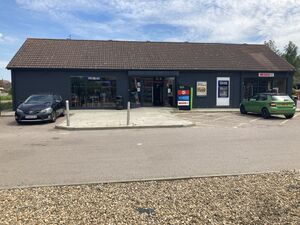 A421 at Marston Moretaine

A choice of fast food at the Marston Moretaine junction. 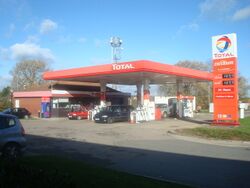 The petrol station as a Total.

The service area was built in 1989 as a large Little ChefHistory, along with a Travelodge and a Fina filling station.

It was built to the north of the Marston Moretaine roundabout on the A421, on Beancroft Road, with a restaurant overlooking the road. In 2010 the junction was upgraded, with the service area being accessed from a new junction.

The filling station went onto become Total but was later sold to Shell in 2012 following Total's nationwide shutdown.

The Little Chef became the first ever Little Chef Choices site in 2002, which saw it gain a Harry Ramsden's and Caffè Ritazza. It reported a 30% uplift in sales, but the choice was soon removed.

Euro Garages took over the building in In January 2017, but lost the rights to the Little Chef name a year later, so they changed the Little Chef to EG Diner. The building closed on 20 July 2018, with the Burger King reopening alongside a new Greggs store in October 2018. A Sainsbury's On the Go store was later added in summer 2019. In 2021, the Sainsbury's On the Go store was rebranded to SPAR before the store permanently closed in late 2021.