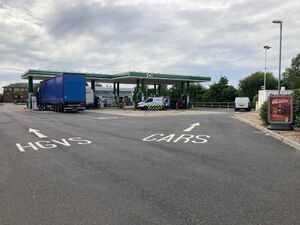 A421 at Elstow Interchange
(also accessible to traffic on the A6)

The Bedford Bypass was built in the 1990s and this small service area was built on a narrow strip of land in the corner of one of its junctions.

Parking within the Holiday Inn Express is strictly for hotel users only and guests are required to provide their vehicle registration number to reception in order to receive free parking during their stay.

These restrictions are strictly enforced by ParkingEye.

The first plans for a service area here emerged in 1995, proposed by Action 2000 Ltd. It was timed to match the Bedford Southern Bypass, which was opened at the same time. The proposal initially covered the full plot of land including a filling station with car wash, restaurant, hotel and a lorry park, but this was later scaled back.

A BP filling station opened in 1997, having been planned by Mobil the year before. Shell had also registered a rival proposal.

Granada received planning permission to build a Little Chef restaurant on the remaining plot of land in 1999, but this was not built. Instead the hotel opened in around 2004 as a Holiday Inn Express, operated by Mango Hotels Limited.

The forecourt continues to be operated directly by BP to this day. In 2008 it became one of their BP Connect sites, receiving a M&S Simply Food store and Wild Bean Café in the process.