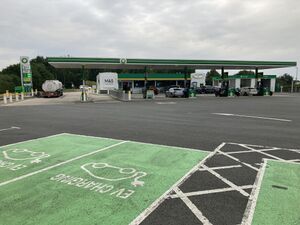 A6 Market Harborough Bypass
(also accessible to traffic on the B6047)

A small facility receives little fanfare as the A6 passes Market Harborough.

Short stay customer parking is available for cars at all facilities and HGVs behind the bp filling station.

During the 1980s, plans for a new A6 bypass to the east of the Market Harborough were given the go ahead. Interest soon turned to adding a service area along the new section of bypass with two sites chosen - this site at the northern end of the bypass and the other being at the Great Bowden roundabout in the middle.

Plans for a service area here at this site first emerged in 1988 for a motorists service area including a filling station, restaurant and lodge. In 1993, local garage firm Ellwoods Garage Limited also submitted plans here however they were refused but then permitted on appeal in 1995.

The northern site eventually opened in late 1999 with a Texaco filling station. A McDonald's Drive Thru was added next to the forecourt in 2001 and Whitbread added a Brewers Fayre pub-restaurant and Premier Inn hotel in 2005. The Brewers Fayre was later rebranded to another of Whitbread's brands, Table Table, in 2008.

The forecourt later rebranded to a Jet filling station in the early 2010s. In early 2016, BP purchased the forecourt and redeveloped the site, reopening in August 2016 with a new canopy, pumps and sales building including a M&S Simply Food store and Wild Bean Café.

3 bp pulse electric vehicle charging points were added to the forecourt here in 2021.