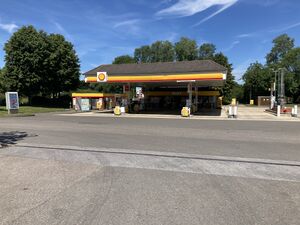 A421 Buckingham Bypass
(also accessible to traffic in the A413)

This roundabout on the outskirts of Buckingham offers a number of shops, forecourts and hotels, including the service station offer.

Short stay customer parking is available for all vehicles, with a dedicated large vehicle parking area located opposite the forecourt. 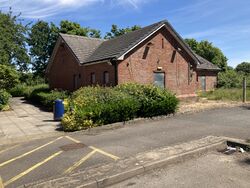 The site was planned in 1987 by Action 2000 and Forte. It opened in June 1991 with a Fina forecourt, named Mount Pleasant services. This was joined by the Buckingham branch of Little Chef. There was a plan to build a Travelodge here too, but this wasn't taken forward.

The restaurant was extended to gain a Burger King in 1996 but the building closed shortly after. It reopened in 1999 but closed again in 2008. The building now lies empty.

The Travelodge finally opened in 2003, and is clearly newer than most roadside Travelodges.

The forecourt became Total and is now Shell, with the current owners preferring to call it 'Buckingham services'. It is often confused with the EG Group site one mile to the west: that one is not part of an official service area.