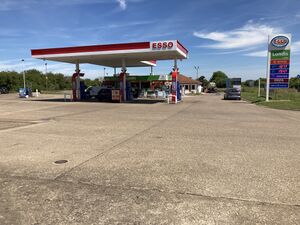 12 more photos in the gallery
Location:

A rare example of an official service station on a local country road, Deanshanger was quickly dropped by the big names but soldiers on with a local restaurant. 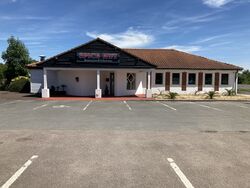 Outline planning permission was first granted for a service area here in 1985 to a local developer, on a parcel of land between the road and the canal, with a filling station and café opening shortly after. It was known as Open Pastures service station.

The café was acquired by AJ's in 1989 who converted the building to one of their restaurants. In 1997 it became a Little Chef, who referred to it as their Buckingham branch, with their other branch in Buckingham closing at the same time. In 1999 it closed and the old branch re-opened. The restaurant at this site is now Spice Hut.

In 1990 the Deanshanger Bypass opened, complicated the road layout here slightly by diverting the course of the A422.

The hotel was added in around 1991 and has been branded Deanshanger Motel, Shires Inn, Comfort Inn and now Hotel MK. It is owned by Shires Investments Ltd.