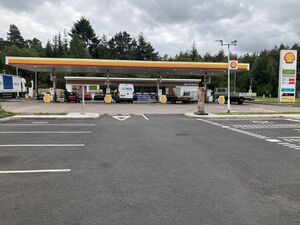 This service area is on the A34 near Newbury, and shouldn't be confused with the Tot Hill on the A14 near Stowmarket.

A small collection of well-known names set back from the A34, near Newbury. 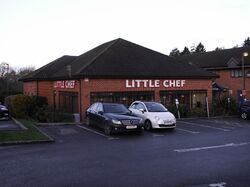 The leftover land was used by Thornfield Roadside Ltd and Redmoor Properties to develop a service area. A service area would make sense, as the new road would take the A34 away from the petrol station at Burghclere Garage and the Little Chef at Greenham Retail Park (known as the 'Newbury' branch).

Redmoor's first drawing showed the northern half of the site in three sections: a Holiday Inn Express, OK Diner, and the McDonald's. The McDonald's and the Shell petrol station on the southern half of the site were built as planned, while in August 1997 the drawing was revised to show a combined Little ChefHistory and Travelodge occupying the rest of the northern half. A picnic area was provided next to the Little Chef.

Forte were known to have an interest in the area, as they had previously proposed a new Little Chef at the next junction to the north.

During construction, a new access was created on Old Penwood Lane, to ensure service area construction didn't interfere with the A34's construction.

The three companies acquired their portions of the site. The Shell filling station and McDonald's both opened in 1998, with the Little Chef and Travelodge opening the following year. The Little Chef used Blue Bell Hill's traditional-themed prefabricated building sign, but with the direct connection to the Travelodge. It soon became a Choices restaurant with Caffè Ritazza and Harry Ramsden's menus, which were all later removed. The picnic area was later turned into an extended car park area.

The Little Chef lasted much longer than many of their other branches. When Little Chef were taken over by Euro Garages in 2017, it was one of their first candidates to be closed and was converted to a Starbucks that June.

The Shell forecourt provides the main toilet facilities. A separate toilet block was provided next to the sales shop, but it has since been demolished.

The forecourt was closed in early 2021 for major redevelopment works. The new forecourt reopened in May 2021 with a new Little Waitrose store and 8 Shell Recharge electric vehicle charging points.