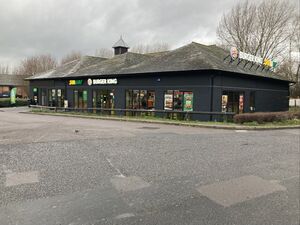 A5 at Bayston Hill Roundabout, Shrewsbury Bypass
(also accessible to traffic on the A49)

A collection of facilities and a garden centre at the Bayston Hill Roundabout on the Shrewsbury Bypass. The former Little Chef building has recently been refurbished to now host a number of recognisable brands.

Plans for a new service area at the Bayston Hill Roundabout were being put forward while the Shrewsbury Bypass was being developed. Outline permission was granted in 1987 for a filling station, restaurant, garden centre, tourist information centre and parking areas for all vehicles including HGVs, caravans and coaches in the south-western corner of the new roundabout.

Baynes Nurseries was the first facility to be built in this area, opening in 1990. The Shrewsbury Bypass opened in August 1992, with an Esso filling station opening shortly after.

It wasn't until autumn 1995 when Forte opened the Shrewsbury branch of Little ChefHistory here, along with a 40-bed Forte Travelodge hotel and a tourist information centre. The location won Forte over instead of their preferred option at Battlefield.

The site became a popular stop-off for tourists heading to Wales, and the Little Chef soon gained a Burger King, Coffee Tempo! and a Good to Go takeaway counter to ease pressure from the main restaurant.

Throughout the 2000s, the filling station included a Snack & Shop branded store and a Coffee Nation machine. In 2010, Esso demolished the sales building and added one of their On the Run Cafés to the site which featured Costa Coffee. 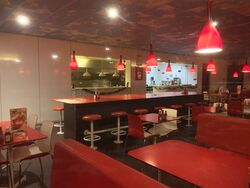 The forecourt was acquired by Euro Garages in 2014, in what was to be their first of many facilities at the site. They rebranded the shop to SPAR and replaced the On the Run café with a Subway concession and a Starbucks on the Go machine. A Greggs store was also later added to the filling station in 2017.

A year later, Euro Garages demolished the car wash and relocated the HGV pumps to make way for a Starbucks Drive Thru. As a result of the Starbucks being built, the large vehicle parking area was lost meaning HGVs, caravans and coaches no longer have a parking area available to them. An Ecotricity electric vehicle charging point was later added to the Starbucks parking area in 2016.

Euro Garages also gained control of the restaurant building when they purchased the rights to Little Chef and its brands in January 2017. It's thought their preferred franchisee, Starbucks, didn't want to share the building with the profitable Burger King. Their rights to the Little Chef name ran out, so in January 2018 the restaurant was renamed EG Diner. EG Diner closed in October 2018 as Euro Garages stopped supporting the brand.

The former Little Chef section of the building was left lying empty, with a few A4 notices advising that the seating area was unsafe and plastic crates blocking off the area.

The Burger King closed for refurbishment in early 2020. It reopened that March, with Subway having been relocated from the forecourt, and a Sainsbury's On the Go store filling the former Little Chef space. The Sainsbury's closed in October 2020, citing low trade.

The garden centre still remains and is now operated by Dobbies Garden Centre.

The forecourt's SPAR store is set to transfer to the ASDA On the Move brand on 8 February 2023.