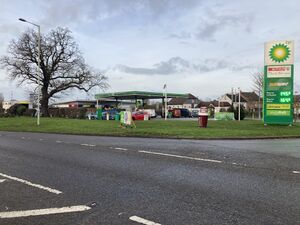 The site of the Battle of Shrewsbury now offers a group of facilities by the roundabout at the northern end of the Shrewsbury Bypass. 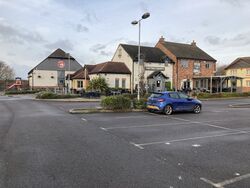 Permission for a service area here was first granted in 1989 when a filling station, restaurant and hotel were proposed. Several proposals have been granted permission since then, with one application in 1992 naming Little Chef and Travelodge as planned occupants. In 2001, a separate application from the Whitbread Group proposed a 52-bed hotel and named Brewsters as the restaurant partner, but this plan was later withdrawn.

Plans for the current facilities first emerged in 2004 when Hurstwood Developments proposed a hotel and pub-restaurant, with Margram proposing the filling station. The filling station was the first to open in 2005 as a BP site with a SPAR store, followed by 'The Two Henrys' pub-restaurant, operated by Hardys and Hansons, and a Travelodge hotel in 2006. At this point, the area was being referred to as 'Hurstwood Service Park'.

When the service area was planned, land was left to the east side of the development for further units to join the site. Outline planning permission was granted for these in 2006, with plans for two units surfacing in 2008. Both units were built and opened in 2010 as a Burger King Drive Thru and Starbucks Drive Thru respectively.

One of the units was originally let to a Subway franchisee however in 2012 the forecourt was acquired by Blakemore Retail who added a Subway store within their sales building instead.

The road through the service area is named Robert Jones Way after Sir Robert Jones, a welsh orthopaedic surgeon who was well known for his work in Shropshire.