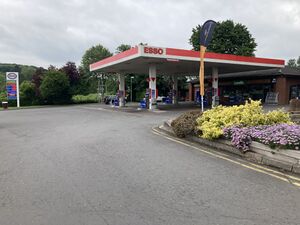 A small petrol station in Herefordshire, signposted as services. 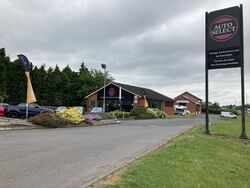 The former Little Chef is now home to a car dealership.

The Northside Post Office and Store and Northside Park caravan park were built next to this junction in the early 1970s.

The Hope under Dinmore branch of Little ChefHistory was built next to the post office in 1984, with a tall roof and large windows.

The post office was later demolished and replaced with an Esso forecourt in the 1990s which was directly operated by Esso themselves and gained their Snack & Shop store in the 2000s.

The Little Chef closed in January 2012 and became a used car dealer called Auto Select. The road signs haven't been updated and still point to the forecourt, promising a range of catering facilities.

The forecourt was acquired by MRH in 2013 who later added their own brand Hursts store in 2015. MFG later acquired the site in 2018 following the merger of the two companies and in 2020 converted the shop to Londis.