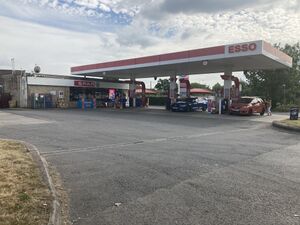 The Nunney Catch Roundabout is home to a small service station, and also the Nunney Catch Truck Stop and Cafe. HGVs are advised to use the latter instead.

Short-stay customer car parking is available at the main Nunney Catch site. HGVs can access the forecourt, but the only parking bays are provided at the truckstop, which is the previous exit from the roundabout. 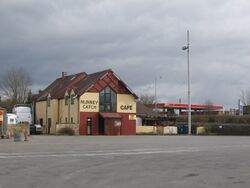 Ridgeway, which runs through the current filling station, is a historic route. Nunney Catch had its own garage, positioned a little further up Ridgeway, where it meets Catch Road. When the A361 was improved in around 1985, the old garage was put out of business, and a new service area was developed closer to the roundabout. The old garage is now home to a car sales business.

A little further down the road from the old garage was the Nunney Catch Café which opened in the early 1980s as a transport café and truckstop. When the new filling station opened at the new roundabout, there were plans to turn this into a Happy Eater, however when Forte purchased Little Chef, they opted to build a new restaurant next to the forecourt instead. This opened in 1989 and closed in around 2005. The truckstop went on to gain fuel facilities of its own in 1995.

Following the closure of the Little Chef, the building has since been used by The Imperial Court Chinese Restaurant before becoming The Catch Café in 2015 and then Ola Barbeque in 2017 however this closed in late 2018 after falling into rent arrears with the landlord. The restaurant reopened as Oldhams Fish and Grill and Hand Car Wash on 19 October 2020.