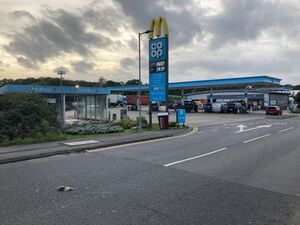 A designated commercial area on the Polegate Bypass.

Short stay customer parking is provided for cars at all facilities, with 6 parking bays available for larger vehicles on the forecourt.

Prices are paid using the YourParkingSpace app. The location code is 11125.

The fees are strictly enforced by ParkMaven. 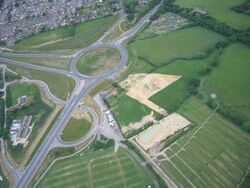 When this section of the Polegate Bypass was built, space was left both for the road to be completed and for a service area to be plugged in. This arrived a few years later, in the style of a long road with an increasing number of developments attached to it. It was developed around Cop Hall House, which is still there.

Initial plans for the service area were made in 1992, with outline planning permission being requested by DM&H Planning Services in 1996. This showed a filling station with HGV/coach parking area, hotel, restaurant, motorists' shop, tourist information centre, picnic area and car parking, all based around a single access road. This was finally approved in 2001.

Margram and Cophall Farm finalised details of the new filling station in 2003, which they called Eastbourne service station. Whitbread soon followed with its intention to build a Brewers Fayre restaurant and a 40-bed Travel Inn on the opposite side of the road.

These opened in 2006, with the filling station branded Somerfield. A picnic area, children's play area and toilet block were provided at the bottom of the access road.

The Brewers Fayre restaurant changed to its sister brand, Table Table, and it was known as 'Treacle Mine', referring to the local folk tale of Polegate's treacle mines. The Premier Inn was extended later that year.

Lite Bites Bistro Café opened on 8 August 2007 in part of the toilet block, with one end being retained as toilets.

Following the The Co-operative Group's takeover of Somerfield, the filling station was rebranded to Total in 2011. The sales shop became a Co-op Food store.

The McDonald's opened on some of the remaining land in 2012. Around this time, the picnic area was sealed off. That land is now used by the farm owners to host car boot sales.

The filling station continued to trade under the Total brand until early 2016, making it the last Total site on the UK's major road network. It was rebranded as Co-op Petrol in late 2017.

The Table Table restaurant was one of many to be rebranded in 2016, this time becoming 'Whitbread Inns'. The interior of the restaurant now features old photos and information about the treacle mines and the history of where the restaurant gets its name from.

The final remaining plot of land on the site was used to house a 'Make Ready Centre' for the South East Coast Ambulance Service in 2017.