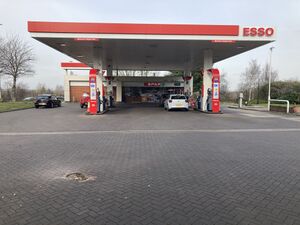 This is the existing service area in Sheffield. The cancelled Smithy Wood proposal and planned Rotherham & Sheffield Gateway site are both documented on the Rotherham page.

Sheffield services may well have been intended to be a grand hotel, but it never quite reached that status and it's now the run-of-the-mill Parkway service station. 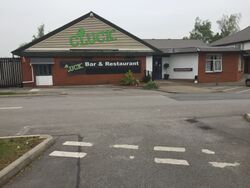 The remains of Cluck.

The service area here is built on the site of an old depot. Plans for the service area came from Esso in 1988, and the filling station opened the following year. Granada then added a Granada Hotel with integrated restaurant a year later, and referred to the site as Sheffield services.

The site was sold to Forte in 1994 who turned the facilities into a Forte Travelodge and the Sheffield branch of Little Chef. Shortly afterwards, Forte were purchased by Granada anyway, who added a Burger King.

As recently as 1996, Granada promoted Sheffield as one of their major sites, giving it the same status in leaflets as their motorway service areas.

The Little Chef was regarded as a poorly performing site for some time, but it managed to keep trading until summer 2010, when it was eventually closed and boarded up. The restaurant was left empty until summer 2014 when it was refurbished to become a drive thru restaurant called 'Cluck'. Cluck later closed in December 2018, leaving the building empty once again.

EG Group are currently seeking to demolish the forecourt, and replace it with a drive thru Starbucks, as well as four electric vehicle charging points. It's not unheard of for petrol stations to be closed, but it is rare for an official service area to shake off one of its key requirements, and it's a possible insight into how the industry will develop. EG Group claim that the cookie-cutter drive thru building will be "attractive and modern-looking".