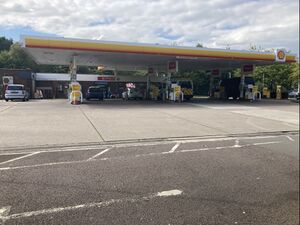 A couple of facilities are provided at the New Inn roundabout near Pontypool, and signposted from all approaches.

Parking within the McDonald's car park is limited to 75 minutes maximum stay and is strictly enforced by ParkingEye.

The Best Western car park is strictly for hotel guests only and entry and exit to the car park is barrier controlled. 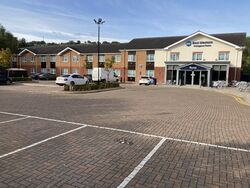 The service area here first opened in 1989 as a Heron filling station and a McDonald's Drive Thru restaurant, with land left to the south of the filling station for future development. This land was lined up for a 88-seater restaurant and 50-bed hotel to use this additional land, but these weren't built.

The unused land has received several proposals for its use over the years, with plans for warehouses in 1990, new council offices in 1999 and a KFC Drive Thru in 2002, but none of these proposals were built. The KFC Drive Thru plans were renewed in 2008 with the addition of a Travelodge hotel, and both were built opening in early 2009. The hotel was later sold to Best Western in around 2013, who introduced 'We Proudly Serve Starbucks' to their café bar.

Following Total's nationwide shutdown in 2012, the filling station was acquired by Shell who added their Select store and their deli2go offering. The site was then acquired by Euro Garages in 2016, who rebranded the store to SPAR and added a Subway store to replace deli2go. In 2017, EG Group converted the car wash to a Greggs store.