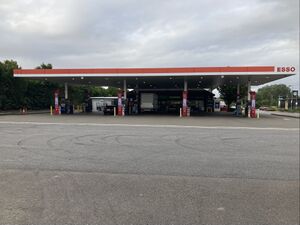 Signposted from the road? North-westbound only

The redeveloped Bicester services is now part of the urban area, standing opposite the Bicester Village shopping centre and a Tesco supermarket.

Customer parking is limited to 90 minutes maximum stay and is strictly enforced by VARS. 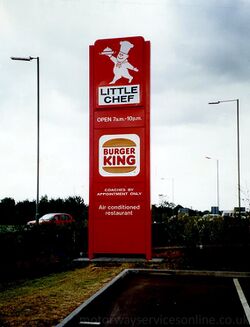 Bicester opened as a Happy Eater in the 1980s. As a popular site, it was one of the first to be converted to a Little ChefHistory. Granada added a Burger King and a Coffee Tempo! soon followed, although that later became Little Chef Express.

Following the addition of several new junctions on the A41, turning it from a fast road to an urban one, many of the road signs referring to the service area were taken down in 2011. It is now regarded as a local facility rather than a major road facility.

There was another Little Chef in Bicester town (London Road), which closed at the same time as the new Bicester branch opened. This one had opened in the 1980s.

Throughout the 1990s the filling station was branded Shell.

In the early 2000s, the site was rebranded to Esso. In 2005, Esso planned to redevelopment the site building a new sales building including a On the Run café and Costa offering, new forecourt and pumps, new canopy and 2 new car and jet washes but these plans were later withdrawn.

In the mid-2010s, the filling station was purchased by Euro Garages and in late 2015, an extension was built on the left side of the shop to introduce a Greggs store to the site.

Euro Garages' rights to the Little Chef name expired in January 2018. It had been hoped that the restaurant would have been converted to something else before then, but having acquired such a large and busy site, they weren't sure what to do with it. The restaurant lived on under the holding name EG Diner until summer 2018 when it finally closed.

As they now owned both the forecourt and the restaurant, Euro Garages proposed re-building the whole site in February 2018. They suggested brands such as Burger King, Starbucks and Leon could be introduced alongside two drive thru restaurants and a drive thru coffee shop. This plan was initially rejected by Oxfordshire County Council, who suggested that it would be "cramped", "poor quality", as well as criticising the appearance of the buildings and the consequences for road safety.

An updated proposal was approved and the former restaurant building was demolished in spring 2020. A new-build Burger King Drive Thru opened that September on what had been a HGV parking area. A Starbucks Drive Thru soon followed, opening next door on 2 October 2020.

Pioneer Way, the road serving a local housing estate, was recently added to the service area.

The SPAR store was rebranded to Asda On the Move in autumn 2021.