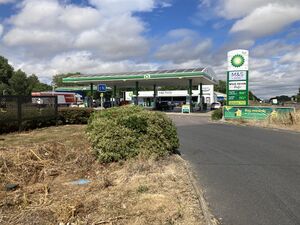 A34 between Oxford and the M40

Three sites staggered between junctions, with no public connection between them.

One northbound service area and two southbound ones near the start of the main part of the A34. The northbound side in particular is receiving investment.

Short stay customer parking is available for cars at all facilities. HGV parking is only available on the southbound side, in the lay-by adjacent to the Shell filling station.

Although the businesses here tend to prefer the geographic name 'Weston-on-the-Green', the road signs are clear that the service area is named 'Family Farm', at least on the northbound side. It is named after the farm that sits behind the southbound Starbucks. It's unusual, but not impossible, for a service area to be named after a farm.

For a couple of years after the completion of the M40, this was the last service station before Birmingham. A 1986 report concluded that the opening of Family Farm northbound made the route "full", and that, other than Cherwell Valley already planned, there was no need for any more service areas in Oxfordshire.

Originally this road was the single carriageway A43 between Oxford and Northampton. What's now known as the two southbound service areas were both built in around the late 1960s, each as a garage.

The southern one garage was branded Esso and called 'Weston filling station'. At the same time, one of the early branches of Little ChefHistory opened next to the southernmost petrol station. This Little Chef was open 24 hours a day at one time.

The northernmost petrol station was built on an old piece of road which was left over from when the A43 was straightened in the 1940s. This has given it a lot of space, which is mostly used as an unofficial lay-by. As a result, it was known as Lay-by Garage, and some properties next to it (demolished in 1998), were known as 'Lay-by Cottages'.

The Layby Cafe joined Little Chef next to this petrol station. A report dated 1986 said the café was serving 200 HGVs a day, with 10% buying fuel. It was the only transport café on the route from Northampton to Southampton.

In the late 1980s Little Chef closed and moved to the position of the old Layby Cafe, where it was more visible from the road and had more space. This used a brick-built building. A fake pitched roof was later added to it. 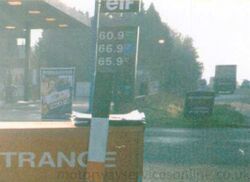 The Elf logo on display next to the A34.

The A43 became the A34, and was upgraded to become a dual carriageway, in time for the opening of the M40 in 1991. Access to Family Farm was provided via the second petrol station.

There would later be a plan from Weston Rescue to demolish Family Farm and build a large truckstop that would merge Lay-by Garage and Family Farm services. It included accommodation, a restaurant, a bar and a recreation room, but the proposal was rejected in 1996. A similar location was looked at a few miles to the north.

The two petrol stations were connected to the new southbound carriageway of the A34. They were now branded Shell and Fina, respectively. The Fina was known for its cheap prices, and then became Elf. The Shell (Lay-by Garage) had looked quiet and run-down for as long as the two were competing. The Elf closed in around 1997.

Happy Eater planned a restaurant and petrol station next to the new northbound carriageway, roughly opposite the Little Chef. This opened in around 1994, with much lighter brickwork and a taller roof. There was also a garage next to the petrol station, which closed for many years, and then opened as Weston Garage, and now Quick Fix. The shape of the field was again dictated by a bend in the historic alignment of the road.

By 1996 this was another branch of Little ChefHistory, with a Burger King soon added in an extension that involved a new lobby area and dividing the restaurant area into two. In 1995 there were plans to build a Travelodge on the grass next to the forecourt, which was owned by Happy Eater, but this was refused by the council.

Meanwhile, in 1996 there was a plan to turn all of the signage by the southbound Little Chef blue. This was a project normally accompanied by a thorough refurbishment of the dining area, but it didn't go ahead. A Coffee Stop continued to trade here until the brand was phased out.

The old Elf forecourt became a caravan showroom. Aside from this, and the fact the southbound petrol station was somewhat isolated further up the road, Family Farm traded as a standard pair of Little Chef restaurants and petrol stations.

In around 2000, the new northbound BP was demolished and re-built, as it was considered to be too small. 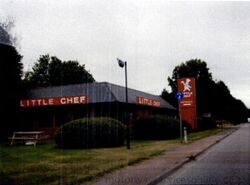 The southbound Little Chef in its final years, in 2009.

In 2011, Applegreen announced plans to take over the former southbound petrol station, and re-open it as "Ray's Service Station". This plan was dropped.

In September 2012, the older and smaller southbound Little Chef was one of a number of branches which were deemed to be unprofitable, and closed. It then re-opened as the restaurant Eat & Go, which closed in late 2015.

After this the southbound restaurant was taken over by 23.5 Degrees and turned into a Starbucks, opening on 16 February 2016. Strictly speaking the separate Shell forecourt is now the main part of Family Farm services, as this is where the free toilets are advertised.

The northbound Little Chef appeared to be performing well. In 2011 it was selected to be refurbished to Little Chef's new look, Wonderfully British. The branch lasted until Euro Garages took over, and they then closed it in July 2017 to convert it to one of their Starbucks.

In 2018, Euro Garages submitted plans to build a drive thru lane around their existing northbound Starbucks store. In 2020, these plans were amended to include an additional drive thru restaurant on the parcel of land between the car park and the BP filling station. This was originally planned to be occupied by Greggs was changed to KFC.

The KFC Drive Thru opened on Friday 18 December 2020. EG Group now refer to their facilities as 'Weston-on-the-Green', but the road signs remain clear that it's called Family Farm.

Four Shell Recharge electric vehicle charging points were installed in the southbound filling station during 2021 however they are yet to go live due to power supply issues.