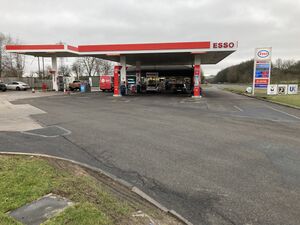 A617 eastbound between Chesterfield and the M1

Once a pair of filling stations half a mile from the M1 at junction 29, now only eastbound facilities are available.

The A617 bypass of Temple Normanton opened in 1970, carrying traffic towards the new M1 link road. This included a pair of filling stations, which were branded Esso and known as 'Heath services'.

In 1986, plans were proposed to convert the southbound oil store into a café.

The eastbound side was redeveloped in 1995 gaining a new canopy, pumps and sales building. Between 1995 and 1997, OK Diner proposed several plans to add one of their diners on the eastbound side. This would have become their Chesterfield branch, but it was never been built.

The eastbound side later gained Esso's Snack & Shop and a Coffee Nation machine in the 2000s before being sold to Euro Garages in 2013. Following the acquisition, Euro Garages rebranded the sales building to SPAR and added a Subway franchise and Starbucks on the Go machine.

Euro Garages later built their 54th Starbucks Drive Thru to the west of the forecourt in 2015, with the store opening on 18 November 2015. The Subway franchise was also swapped to a Greggs store in 2018.

The SPAR store was rebranded to Sainsbury's On the go for a time between late 2019 and late 2021, before reverting back to SPAR.