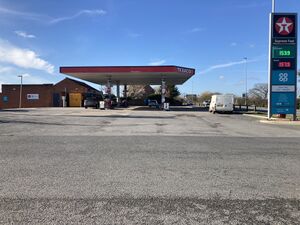 A59 between Harrogate and York

A petrol station and restaurant on the road to York.

This service area takes its name from the nearby Skip Bridge over the River Nidd, which used to carry one of the original Roman roads, Dere Street. The bridge received Grade II listed building status in 1985 and now acts as a lay-by for the modern-day A59.

Less than half a mile to the west of the bridge is Skip Bridge garage, which was built in the 1960s, next to the Skip Bridge Bungalow. During the 1970s there were plans to add a vehicle sales showroom to the forecourt, two detached houses to the east and a caravan and touring park on land to the rear of the forecourt, with only the garage showroom gaining planning permission.

Plans to add a restaurant between the bungalow and forecourt surfaced in the early 1980s, first coming from Little Chef in 1981 and later Happy Eater in 1985. Happy Eater eventually built the restaurant which opened in around 1985. Fuel was provided by Esso at this point.

The restaurant later became the Skipbridge branch of Little Chef in 1995, which closed in 2002. Following the closure of the Little Chef, local farmers Ainsty Farms Direct built a new farm shop at the back of the car park, opening in 2005. The original restaurant building was later purchased by an independent owner and is now home to Sweet Basil.

The forecourt later became branded BP with a Co-operative store. In 2010, the store changed to a Co-op Food store, and in 2013 became directly operated by The Co-operative Group who rebranded the site to a Texaco filling station.

The forecourt used to include a car wash but this was removed in 2016 to accommodate additional car parking and an extension to the sales building.

The Ainsty Farm Shop will close in September 2022, citing to rising energy costs.