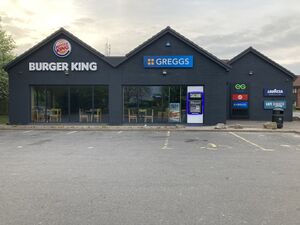 A64 eastbound between Tadcaster and York

The poorly-aligned A64 offers several facilities as it passes Bilbrough. This is the eastbound one, and its much less fortunate than its Bilbrough Top partner.

Short stay parking is provided for customers in cars only. No HGV parking is available. 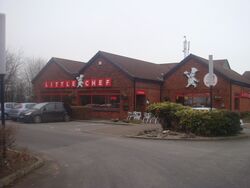 The site was developed by Citygrove Roadside in the late 1980s, and opened in June 1991 with the York East branch of Little ChefHistory alongside a Travelodge hotel and a JET filling station. A Burger King was added in the late 1990s, but later closed.

The restaurant was one of Little Chef's most profitable sites. Between 1993 and 2004 it had a partner at York West, which was less successful. This one, York East, kept going for much longer, and was the second restaurant to be refurbished by Heston Blumenthal, copying the blue sky ceiling and wall of memorabilia.

Following the success of Heston's refurbishment, a Little Chef Express was added in 2012 and the Burger King re-opened in 2014. The restaurant lasted until the very end of Little Chef, January 2018, when the rights for EG Group to use the brand expired. Keeping it this long was unlikely to be a deliberate decision, but the result of the new owners having problems converting it to a Starbucks. Time had ran out and the restaurant transferred to the temporary brand EG Diner.

Both restaurant closed for refurbishment on 24 August 2018, reopening in November 2018 with a moved, refurbished Burger King and a new Greggs store in the former Little Chef area. A Sainsbury's On the Go also joined the site in the former Burger King space in summer 2019, promoting the site as 'Tadcaster'. This closed in March 2020 due to COVID-19 and never reopened, with the unit now emptied. The Burger King also permanently closed in November 2020 due to the COVID-19 lockdown.

The forecourt rebranded to Total in the 2000s before being acquired by MRH in the winter 2011 and rebranding to BP. MRH later added their own-brand Hursts store in 2013. MRH was acquired by MFG in 2018 following the merger of the two companies and they later rebranded the store to Londis in 2020. The site was then rebranded from BP to Esso in May 2022.

These days, the main Bilbrough service area is the rival over at Bilbrough Top. This site, which is merely called 'Bilbrough', barely gets a look-in, with a vague road sign hidden in a bus stop telling motorists that 'Services' are on the left but not saying what there is or whether it's accessible to HGVs.

A second road sign was added in 2012 (also with errors), explaining that the 'Services' is in fact this one. However, full signage isn't used until you've gone past it. Even more confusingly, there are signs outside the entrance to this service area which direct pedestrians looking for 'Services' on a one-mile journey over the bridge and onto the other side of the road!

It wasn't always this way. Bilbrough Top gets all the attention now because it has access to both sides, but it was originally positioned on the westbound side only. Bilbrough then came into its own, as the eastbound partner.