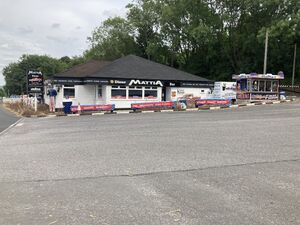 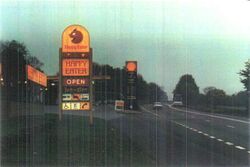 There is a proposal to replace the A303 between Sparkford and Ilchester with a new road, which will see the old road past Mattia Diner turned into a quiet cul-de-sac. This was one of several concerns raised by the Planning Inspectorate, but the scheme has now been approved and the work can be seen from the diner. The forecourt closed soon after work started.

Food was originally served here from a green bus. A formal building was provided in 1963, with the opening of the Frying Pan Cafe. It had a bungalow attached for staff. In 1967 a hotel was planned to be added here. By 1980 there were plans to demolish and re-build it, but the building was then damaged by a fire in 1984.

Following the fire, the building was demolished and replaced by what was supposed to be a Little Chef, but opened as a Happy Eater. In 1996 this became the Sparkford branch of Little ChefHistory anyway. Granada wanted this restaurant to be a pilot site for a "new concept", which was called Little Chef Express and had a blue colour scheme, with rounded logos showing its mascot running and the word "diner" written all around the building. The trial ran for a year before the colour scheme reverted to normal in 1997, albeit with a few blue mascots still around. In 2008 the restaurant closed entirely and fell into a very poor state of repair.

The restaurant was later purchased by Andrea Mattia and her family and in 2014 they opened the Mattia Diner, who's owners were remarked by the press as being a "USA-mad couple". The restaurant theme is 1950s USA and is covered with distinctive Elvis memorabilia. 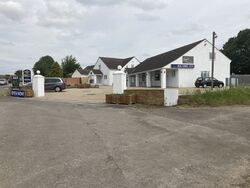 Two miles to the west of here (near the B3151 exit) was another service station called Camel Cross. It was one of the original (pre-1974) Welcome Break Cafes, and had been converted to a Happy Eater by 1979, which was later closed in favour of Camel Hill. It was positioned next to a garage called Camel Cross Motors, which was built in 1948. The garage went onto become a bar and bistro, and the restaurant a bed and breakfast, but both are now closed and up for sale. The junction is also now closed.

The filling station was built in 1967. It was once operated by Shell directly, but was sold to MFG, who upgraded the forecourt and shop throughout mid-2016, changing the shop from Select Shop to Londis in the process. At the back of the services was a fenced off area, which appears to have been an exit through to Gason Lane.

Planning permission was granted to MFG in March 2018 for demolition and redevelopment of the forecourt. The plans also included the building of a drive thru coffee shop on waste land situated behind the forecourt.

The forecourt was compulsory purchased as part of roadworks, and it permanently closed on 12 October 2022.