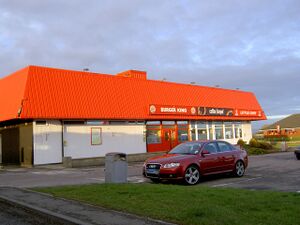 Rainton services was a pair of Little Chefs, until it fell victim to the A1 upgrade.

The northbound café opened with a large, distinctive building with a sloping metal roof. There was supposed to be a footbridge between the two sides but it wasn't built.

Happy Eater was acquired by Trusthouse Forte in 1995, who chose Rainton as one of their first sites to be replaced with Little ChefHistorys, which they believed was a more accessible brand. In order to reflect the Little Chef brand, the metal roof of the northbound building was painted bright red.

As a Little Chef, it was one of their busiest restaurants. A Coffee Stop was soon added on each side, which soon became a Café Nescafe. When Granada took over Little Chef, they replaced this with a Burger King. The northbound side also gained a Coffee Tempo! café in 2006, built in a new extension to the building.

When Little Chef passed to new owners Permira at the start of the new millennium, they started to look at the number of Little Chefs in the area. As a result of the southbound restaurant having no supporting lodge or filling station, and with the Sinderby branch only 10 miles down the road, this site closed in 2002. Permira then closed Sinderby in 2004 which saw new owners, People's Restaurant Group, re-open Rainton South in 2005. 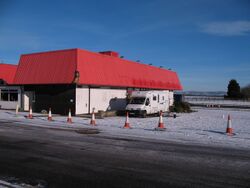 The building after closing.

Plans to upgrade the A1 between Dishforth and Leeming Bar to motorway emerged in 2008, which involved widening the road here and consuming the land that Rainton services sat upon. For a while it looked like a new motorway service area would be built here, but plans never materialised as the owners, Malthurst, were more interested in a site near the A61.

Consequently, the southbound service area was compulsory purchased as part of the roadworks, with the Little Chef closing in late 2008, being demolished soon after. It wasn't long before the Little Chef, Burger King and Coffee Tempo! on the northbound side followed, closing on 16 December 2009, with the main building being boarded up.

The Coffee Tempo equipment was transferred to the Skeeby branch to open a new shop. The last facility to close was the northbound Texaco filling station which closed on 3 January 2010 marking the end of Rainton services. Texaco demolished the canopy, but left the shop standing.

The northbound site was vandalised shortly after closing and slowly fell to ruins, with a few 'Urban Explorers' visiting the site. 28 Days Later hosts pictures of its state in February 2015.

The northbound site was eventually sold to Thompson Commercials in mid-2015, who demolished both buildings and erected a new Renault trucks dealership. The site is still clearly seen from the A1(M) but accessed from the local road network.