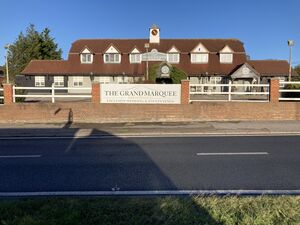 A choice between an old pub and a refurbished coffee shop, at the East Horndon exit. 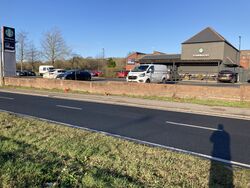 The former Little Chef is now a Starbucks.

The Halfway House Pub was built in the 1930s, next to Keepers Cottage, on the Southend Arterial Road by its junction with Brentwood Road. The building next to it became an independent restaurant, and there was a petrol station there too. There was an additional restaurant and filling station on the westbound side.

In 1968 the remaining restaurant was purchased by Little ChefHistory to become their East Horndon branch. They rebuilt this in 1982.

A Little Chef Lodge was built in what was the back garden in 1986, and this was officially opened by the Chairman of Brentwood Council, Cllr Eric Mather and his wife Mollie, on 18 July 1986. The following April, the hotel was chosen as the site of one of the county's first tourist information signs.

The Little Chef gained the Little Chef Choices refurbishment in 2002, whereby Harry Ramsden's and Caffè Ritazza were added but later removed. A Coffee Tempo! was also later added. The hotel became a Travelodge.

Little Chef was acquired by Euro Garages in 2017, who closed the restaurant here and refurbished the building into a Starbucks store.

There is a plan to add six Osprey electric vehicle chargers to the Halfway House car park, although this would be primarily accessed from the Brentwood Road entrance, which allows for travel in both directions.

Meanwhile, the westbound side became a nightclub called Elliot's (later Twighlites) before closing in the mid-1980s, leaving behind two derelict buildings. Since closing, there have been several plans to redevelop the westbound site, including a full service area proposed by both Petrofina and Burmah Oil during the early 1990s.

There had also been plans to turn the building into a restaurant and a car sales showroom, but the building was the victim of an arson attack in the mid-1990s which saw interest in the site decline. The site was later hidden from view by large advertisement boards alongside the slip roads during the 2000s.