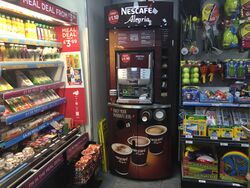 A Nescafé Alegria coffee machine situated within a WHSmith store.

Cafe Nescafé is a band owned by Nestlé, along with the rest of the Nescafé range. Nestlé used to franchise the 'Cafe Nescafé' brand as a coffee shop concession.

The brand was introduced by Granada to many of their sites in 1999, including their motorway services and Little Chefs, replacing Coffee Stop.

Within the first year, 13 motorway outlets had opened. Unusually, it was often provided in the filling station, which was the start of an increasing trend for snacks to be made available there.

One particular outlet at Scotch Corner soldiered on for a long time after Granada left the industry.

Nescafé Alegria is a coffee machine brand which is currently at two motorway locations. At Cobham, it replaced a former Starbucks on the Go machine due to WHSmith's new partnership with Nescafé. WHSmith then rolled out the machines to all of their Extra sites during 2018/2019, before being replaced with Costa Express in 2020/2021.

Another brand used by Nescafé is Nescafé & Go, which used to be located within a few Bonjour stores at Total filling stations.

These are some of the service areas Café Nescafé used to be found at: