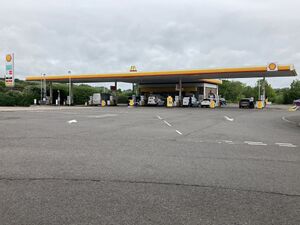 A41 between Watford and Aylesbury

A petrol station and fast food offer at the southern end of the A41. 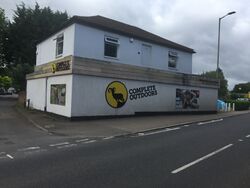 The junction here mainly serves the services and the Bourne End industrial estate.

The site was first developed in 1992 by Margram who proposed a service area, hotel, restaurant and parking areas. This was granted planning permission in March 1993. The service area opened with a Travel Inn hotel and a BP filling station. Space was left for a restaurant which opened in around 1995 as a McDonald's.

Margram did plan to add a second hotel to the site, but despite planning permission being secured in 2005, it was never built.

During the 2000s, the site was rebranded to Total with a Bonjour store and also featured Café Nescafe for a time. The filling station was later acquired by Shell in 2012.

The McDonald's restaurant was extended in 2018.

Shell are currently proposing to redevelop the site introducing new pumps, canopy and a larger sales building to the site. The works will also see the removal of the HGV parking bays in favour of more car parking spaces and the installation of 4 Shell Recharge electric vehicle charging bays.

A Little Chef restaurant was positioned nearby in Bourne End village, which opened in around 1975 and closed in 1995, after the bypass opened. Margram were granted planning permission to add a Little Chef to the facilities here in summer 2000 but upon resubmitting amended plans in 2002 it was refused on road safety grounds. Margram re-submitted the 2002 plans in 2007 and plans were again refused on the basis that the Little Chef wasn't needed. The building later became home to Complete Outdoors until September 2020 before being purchased and demolished in 2021 to make way for a new housing development.